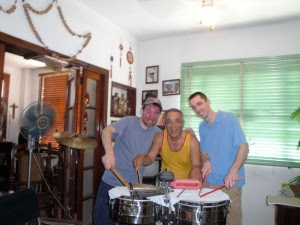 Music professor Eric Schmitz and undergraduate student Nate Felty spent a week in Cuba from March 31 through April 7 studying Afro-Cuban music with renowned music professor Emilio Del Monte.
The two were able to travel to Cuba due to loosened regulations regarding travel that previously required all travel for educational purposes to count for credit.
Throughout their week in Cuba, Schmitz and Felty completely immersed themselves in Cuban music, seeing music performances and receiving three hour- long lessons from Del Monte daily.
“[In Havana] you can find live music everywhere.” Schmitz said.
The two would pick which restaurants to eat at based on the live bands they heard from each one.
“The only time when it looked like we couldn’t find live music was Good Friday,” Schmitz said.
When the pope had visited Cuba the previous week, the Cuban government allowed for Good Friday to be a national holiday, so there was no live music in the restaurants anymore.
“But on the way back to the hotel, we actually heard some music and had to turn around,“ Felty said. “We caught the band mid-rehearsal practicing in their house. People were crowding up against the windows to listen.”
Schmitz, who specializes in percussion, explained the idea behind this project.
“Cuba is really one of the hot spots for percussion in the world,” Schmitz said. “Cuba’s a really interesting place because it’s difficult to do things without personal connections.”
Schmitz had met a fellow musician in Cuba during his last visit at a restaurant, and this musician recommended that Schmitz meet with his teacher, Emilio Del Monte.
Although Schmitz was unable to study with Del Monte at the time, he maintained an interest in another trip to Cuba. He spoke with his student, Felty, about the possibility of going to Cuba earlier this year, and the two later decided to apply for a grant to make the trip possible.
Felty explained what he was able to accomplish on this trip. “I’ve got enough material from 18-20 hours of lessons we had to study for decades,” Felty said. “I got more out of the first day I was there than I expected out of the whole week.”
Felty is pursuing a career in music performance as a percussionist.
“I’d only known a handful of styles when I came down, and I just took notes every day from what my professor was saying,” Felty said. “There’s enough information in each day of notes for me to dissect for a year.”
It was only after they began studying with Del Monte that they realized how prominent a musician he was. If there was a who’s who of Cuban music, Del Monte has played and recorded with everyone.
“Literally, he has played with pretty much everybody, and knows all of them,” Schmitz said.
Schmitz and Felty will be presenting what they learned and performing on Quest Day in Campus Center 208 at 10:15 a.m.
The trip to Cuba was funded by a grant from the Research and Individualized Student Experiences (RISE) at Oswego State. With Schmitz’s guidance, Felty wrote a proposal for their research and applied for the Student/Faculty Collaborative Challenge Grant. According to the ORSP, the purpose of this grant is “to promote and support true student/faculty scholarly collaboration.”
The OSRP offers a number of different grants for faculty and students, both individually and collaboratively. They are in the process of moving the responcibility to another office, Research and Individualized Student Experiences (RISE). Schmitz, who also works on the committee that reviews proposals, recommended that any student interested in partaking in a similar project of their own find a faculty member at Oswego State that has connections to the country they are seeking to travel to.
“A good place to start is the Office of International Education, because they work closely with faculty members and know who goes to what countries,” Schmitz said.
Although the Student/Faculty Collaborative Challenge Grant can be used for international travel, there are a wide range of domestic projects that it is used for.
Posted by John McAuliff at 9:02 PM