Conor Kennedy, Harvard University | June 21, 2014 9:10 am |
[Editor's note: Conor Kennedy traveled this summer to Cuba to dive the Gardens of the Queen, one of the most pristine marine environments in the Caribbean, to conduct ecological assessments of the coral reef ecosystem with Ocean Doctor. This is Part I of a five-part series. Read Part II, Part III andPart IV.]

I’m in Havana getting ready for an early morning trip to the Gardens of the Queen, the archipelago and reef complex 60 miles south of Central Cuba in the rich intersection where the waters of the Gulf of Mexico meet those of the Caribbean Sea and the Atlantic Ocean. Theexpedition sponsors are Ocean Doctor and The Explorers Club. Our mission is to gather data on the Caribbean’s last pristine reef system.

Today we met with former President Fidel Castro, who was an early and passionate advocate for protecting the reef. Castro told us that he had fished and dove the extraordinary reef over its entire 60 mile length. He began by telling us the history of a famous battle that took place on the reef in the War of Independence against Spain when an entire Spanish fleet was sunk by armored American war ships. His father came to Cuba as a Spanish soldier during that conflict.
He also told us about his personal evolution as an environmentalist. He began as an avid marlin and spear fisherman who slaughtered many marine species on the reef, assuming the oceans were infinite and could never be depleted. He next told us of an island rookery covered with Central American pigeons called torcaso palomas which he slaughtered with a shotgun and ate with great relish until he almost died after being poisoned by the toxic bark of the trees in which these pigeons roosted. Shortly after killing the doves he met with marine conservationist Jacques Cousteau. That meeting helped transform Castro into a committed environmentalist. He has committed to preserve 25 percent of Cuba’s waters from extractive fishing as Marine Preserves, while the U.S. lags, preserving less than 2 percent of our coastal waters.

Posted by John McAuliff at 10:06 PM No comments: 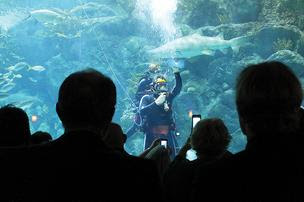 Members of the Florida AquariumFoundation will travel to Havana, Cuba to hold meetings with the National Aquarium of Cuba.
The Cuban aquarium is looking to build a research partnership with a U.S. counterpart, but the Florida Aquarium has not stated publicly whether it is interested in such an arrangement, the Tampa Tribunesaid. The trip is expected to stretch from next Tuesday to Sunday.
“This is an educational mission,” said Tom Hall, foundation chairman who will travel on the trip. “We want to talk about what we do, hear what they do, and then compare notes. I’ll know more when we get back.”
According to Jeffrey Boutwell of the Latin America Working Group Education Fund in Washington, D.C., the Cuban aquarium wants to create a relationship with a U.S. aquarium on issues of mutual interest including minimizing the effects of oil spills and protecting populations of fish including marlin and tuna, the Tribune said.    http://www.bizjournals.com/tampabay/blog/latin/2014/10/florida-aquarium-team-to-travel-to-cuba.html

Posted by John McAuliff at 1:16 PM No comments:


Patrick Hemingway, grandson of the late U.S. author Ernest Hemingway, waves from a yacht at the Marina Hemingway in Havana Sept. 8. Hemingway's grandsons Patrick and John are in Cuba to mark the 60th anniversary of his Nobel Prize in Literature. (ENRIQUE DE LA OSA / REUTERS)
By Doreen Hemlock,Sun Sentinel

Richard Graves dreams of the day when South Floridians can take their yachts for a weekend in Cuba.
That's why the Fort Lauderdale-based marina consultant is helping organize a trip to explore the island's marine scene, hoping to prepare for a time of open U.S-Cuba travel as Cuba seeks to develop marinas.
Graves aims to accompany more than a dozen U.S. marine industry specialists to Cuba from Feb. 18 to 22, just after Miami's international boat show. He hopes some participants at this month's mammoth boat show in Fort Lauderdale may sign up for the trip.

Their group aims to meet folks from the veteran Marina Hemingway and the expanding Marina Gaviota in Varadero, as well as Cubans in the arts, budding businesses and other fields.Washington's 52-year-old embargo on Cuba restricts most U.S. business with the communist-led island, but the Obama administration allows people-to-people tours, such as the one Graves is developing with licensed travel group Other Cuban Journeys.

"The idea is to make contacts and get a visual. You have to start understanding the culture to do business there one day," said Graves. "This is a long-term process."
The largest island in the Caribbean, Cuba now has just 15 marinas with roughly 800 slips, an inventory basically frozen for half a century. But the government has plans to add 23 marinas with more than 5,000 slips, working with foreign investors.
Projects include expanding Gaviota Varadero marina to 1,200 slips to become one of the Caribbean's largest, Cuban officials have said.

A University of Florida study has estimated 60,000 U.S. vessels over 25 feet long would visit Cuba the first year after Washington lifts restrictions on U.S. boat travel to the island.
"For boating and the marine industry, Cuba is a perfect gateway to the Caribbean, eastern and western," said Graves, who has done studies to boost U.S. boating to the Caribbean overall.
dhemlock@sunsentinel.com, 305-810-5009

http://www.sun-sentinel.com/business/fl-marinas-cuba-trip-20141003-story.html
Posted by John McAuliff at 2:44 PM No comments:

Posted by John McAuliff at 1:20 PM No comments: