US, Cuba Near Agreement On Commercial Flights 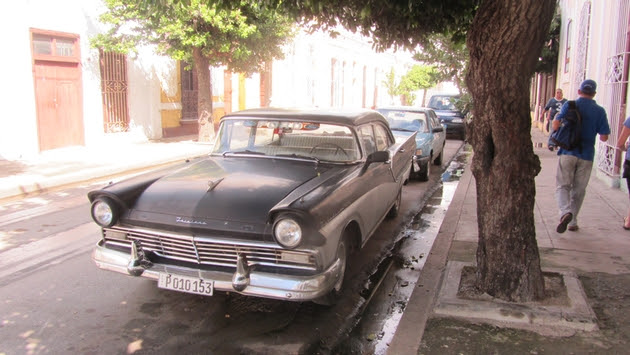 Nearly a year to the day after the Obama Administration announced it would restore diplomatic relations with Cuba after 52 years, the two countries are on the verge of an agreement to resume commercial flights, the Associated Press reported.
“Our two countries have engaged in a historic dialogue on a wide range of issues,” Jeffrey DeLaurentis, who heads the U.S. embassy in Havana, told reporters in a conference call. “We have discussed concrete objectives on civil aviation, direct transportation of mail, environment, regulatory changes and counter-narcotics. And we have either reached understandings on those topics or continue to narrow our differences in ways that suggest we could soon conclude such understandings.”
The talks are ongoing, but this is the first concrete indication that commercial flights appear to be imminent. At the moment, American travelers to Cuba and Cubans to the U.S. can do so only on special charters.
In fact, the first charter flight from Los Angeles to Havana took off on Saturday on American Airlines. Howard Kass, vice president for regulatory affairs at American, told the Miami Herald last month that the carrier – which already flies 22 charter flights a week to Cuba – is ready to resume commercial service.
“We anticipate operating to Cuba as soon as the two governments work everything out. We’re ready to go now,” he said. “We look forward to going, and we think it will be a great benefit for passengers. Not just in Miami, but throughout the United States. Today, when we take somebody to Cuba, the charter process is a separate one. We can’t ticket them all the way through. Their bag check isn’t seamless. So once different points in Cuba become part of the American network, a passenger in Minneapolis will book a ticket to Havana just as easily as that same passenger in Minneapolis books a ticket to other points in the Caribbean on American.”
American, with a major hub in Miami, seems best poised among the major commercial airlines to quickly begin flights to Cuba. However, virtually every big U.S. carrier, including United, Southwest and JetBlue, has expressed interest in flying into Havana.
U.S. and Cuban officials could make a formal announcement before year’s end. DeLaurentis said authorized American travel to the island on charter flights is up 50 percent this year over 2014, buoyed by significant expansion in cultural and educational programs and, of course, the administration’s decision to restore relations.
Last week, the U.S. and Cuba jointly announced a tentative deal to resume direct mail service between the two countries, which hasn’t been allowed since 1963. Each country will launch a pilot program to test direct service but gave no indication how quickly that can happen.

http://www.travelpulse.com/news/airlines/us-cuba-near-agreement-on-commercial-flights.html
Posted by John McAuliff at 8:37 PM No comments:

Verizon has become the first U.S. wireless company to let its customers make calls, send texts and use data while in Cuba.

Though Verizon doesn't own or operate any cell towers in Cuba, it has set up roaming agreements with local Cuban telecom companies. That means Verizon customers can use their cell phones while visiting the island.

The service isn't cheap: Voice calls will cost a pricey $2.99 a minute, data will set you back $2.05 per megabyte and texts will be charged at hefty global rates.
Verizon also said customers traveling to Cuba first have to subscribe to the Pay-As-You-Go International Travel Option, and they must have a phone designated as a "world device" that is capable of receiving signals in Cuba.

http://recorderjournal.com/2015/12/11/verizon-offers-roaming-in-cuba/
Posted by John McAuliff at 4:00 PM No comments:


CAYMAN BRAC, Cayman Islands -- It was a historic day for Cayman Brac on Saturday November 28, 2015 as Cayman Airways (CAL) launched the island’s first international flight to and from Holguin, Cuba, and also expanded the airline’s existing service between Miami and Cayman Brac.

Speaking at a special ribbon cutting ceremony at the gate prior to the departure of flight KX842 bound from the Brac to Holguin, deputy premier and minister for tourism, Moses Kirkconnell, said: “The introduction of this service provides several benefits and allows us to make better use of our existing assets, in this case the Charles Kirkconnell International Airport, which was recently enhanced and expanded to handle more capacity. Servicing the Holguin route from Cayman Brac significantly reduces the pressure on the Owen Roberts International Airport (ORIA) on Grand Cayman, which already experiences high demand, particularly on a Saturday. Passengers arriving into Cayman Brac from Holguin will be able to subsequently travel to Grand Cayman or Miami.”

Reiterating some of the other reasons for the new service, Cayman Airways president and CEO, Fabian Whorms, noted that this new service to Eastern Cuba was also designed to complement the airline’s existing flights between Havana and Grand Cayman, which is often capacity constrained.

He said it was also anticipated that some of CAL’s existing Havana passengers, many of whom are from Cuba’s eastern towns, will be able to utilize this direct service and avoid lengthy travel between the capital city and their hometowns.

“Holguin, the fourth largest city in Cuba and a popular vacation destination city, is conveniently located between the Cuban cities of Santiago de Cuba and Camaguey (the country’s second and third largest cities respectively) allowing Cayman Airways to reach the approximately five million people living in this region of Cuba,” he said. “With convenient connections in Cayman Brac on to Grand Cayman and Miami, this service will allow many passengers to simplify their travel and provide the opportunity for others to experience new locations.”

Additionally, the new route provides connectivity to CAL’s interline partners like Air Canada and Condor as well as others in Holguin, making this new route poised to attract more European and Canadian visitors for the country as either a convenient point of connection, or as part of a dual-destination vacation package.

Also celebrated was CAL’s new nonstop weekly outbound service from Cayman Brac to Miami, thanks to the expansion and renovation earlier this year of the Brac’s Charles Kirkconnell International Airport (CKIA) bringing the airport into compliance with international safety standards for nonstop flights into the United States.

“This new nonstop service from the Brac to Miami is a much welcomed convenience for Cayman Brac visitors and travelers alike,” added Whorms. “It is a natural extension of our long standing direct inbound flight from Miami to Cayman Brac as it now completes the travel, allowing Miami passengers to now travel nonstop both to and from Cayman Brac. Additionally, it is hoped that the flight will provide a convenient connecting flight from Holguin to Miami for those legally able to travel between the two countries.”

Both new international flights out of Cayman Brac will operate once a week, on Saturdays.

http://www.caribbeannewsnow.com/headline-Cayman-Airways-launches-new-flights-to-Cuba-28582.html
Posted by John McAuliff at 8:42 AM No comments: