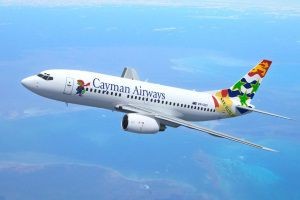 (CNS Business): The National Flag Carrier will be launching a new weekly flight to Cuba from Cayman Brac at the end of next month, the airline has announced. The new Cayman Airways Limited (CAL) service between the Sister Island and Holguin is the second Cayman to Cuba route and the first outbound international route launched since the Brac airport was expanded.
In a statement released Friday, CAL said the first flight is slated to depart Cayman Brac for Holguin on Saturday 28 November and will operate once a week on Saturdays. Cayman Airways Express will provide connecting flights to and from Grand Cayman.
The new flight is designed to meet the growing demand for flights between Cayman and Cuba, and to provide dual destination travel opportunities for Canadian and European visitors to Cayman, CAL said.
“This new service to eastern Cuba is designed to complement the airline’s existing flights between Havana and Grand Cayman, which is often capacity constrained,” explained Cayman Airways President and CEO, Fabian Whorms. “Holguin is Cuba’s fourth most populous city and was selected due to its close proximity to Santiago de Cuba and Camaguey, Cuba’s second and third most populous cities respectively. It is also anticipated that many of the airline’s existing Havana passengers, many of whom are from Cuba’s eastern towns, will be able to utilize this direct service and avoid lengthy travel between the capital city and their hometowns.”
Commenting from a destination standpoint, Tourism Minister Moses Kirkconnell said another important benefit of CAL flying to Holguin, which is a popular resort area for Europeans and Canadians, is that it is currently served by several of CAL’s interline partners like Condor and Air Canada, as well as other airline partners.
“CAL’s new flights to Holguin will therefore provide connectivity as well as dual destination opportunities for Canadian and European travelers, which is excellent for Cayman,” Kirkconnell said.
In addition to creating an opportunity to increase the number of European visitors to Cayman, the minister said CAL’s new service to Holguin, Cuba will also be a great benefit for Cayman Brac, which will see its first outbound international flight schedule launched since the Charles Kirkconnell International Airport (CKIA) was expanded.
“The introduction of this service provides several benefits and allows us to make better use of our existing assets, in this case the international airport in Cayman Brac, which was recently enhanced to handle more capacity,” he explained.
“This new service will also help Cayman Airways to grow its business while not adding any further pressure or demand on ORIA in Grand Cayman, which already experiences high demand especially on a Saturday. Passengers arriving in Cayman Brac from Holguin will be able to subsequently travel to Grand Cayman and Miami.”
When the new weekly Saturday service begins 28 November, flight KX842 departs Cayman Brac (CYB) at 1:30pm, arriving in Holguin (HOG) at 2:30pm. From HOG to CYB flight KX843 departs at 3:30pm and arrives at 4:30pm.