STOCKBRIDGE, Mass. — Five Berkshire high school students and three teachers from the Waldorf High School in Stockbridge made an historic visit to Cuba this month, traveling first to Cienfuegos, where they stayed with Cuban families, the first U.S. high school students to do so since at least the Carter administration.


After a week in Cienfuegos, the group traveled to La Habana (Havana) through April 22.

In past years, Spanish language students at the Waldorf High School have traveled to Peru and Colombia for their real-world language training. According to Andrea Panaritis, a Waldorf High School parent and executive director of the Christopher Reynolds Foundation, which supports work to strengthen contacts and understanding between US citizens and institutions and their counterparts in Cuba, the trip is special.

“The Waldorf High School’s trip is unique in that it takes advantage of a small opening in U.S. regulations made by the Obama administration, at the same time that deep social and economic changes are underway in Cuba,” she said.

Waldorf students not only lived with Cuban families during their stay — a first for American high school students — but worked directly with Cuban students doing community service, primarily in Cienfuegos rather than Havana.

“The students will take part in community projects such as trash collection, a visit to a local orphanage to play with the children and making art with artists with Down syndrome. We will stop at Playa Giron, the site where the famous Bay of Pigs invasion took place in 1961, visit the Museum of the Revolution, the Museum of Cuban Art and La Finca Vigia, home of Ernest Hemingway, where he wrote two of his most celebrated novels, For Whom The Bell Tolls and The Old Man and the Sea," teacher Sonia Cintron said prior to the trip.

Students also planned to visit Cuban musicians Magia Lopez and Alexey Rodrigues of "Grupo Obsesion," who performed the first fundraiser for this trip last October in Stockbridge. The Waldorf High School trip to Cuba was arranged through Cuban Educational Travel and made possible in part by a generous grant from the Alice and Richard Henriquez Memorial Fund/Youth World Awareness Program through the Berkshire Taconic Community Foundation. Arizona Pizza in Pittsfield also donated money for this trip, and students raised money by selling soup and baked goods.

While Spanish language students were in Cuba, German language students at the Waldorf High School were visiting their sister school in Munich, as they do every two to three years with their teacher, Ursula Wirth. The group will also travel to Vienna before returning to the Berkshires on April 25.

“These trips encourage real, practical foreign language learning,” says Waldorf High School Faculty Chair Stephen Sagarin. “Our slogan is, ‘Small School, Big World,’ and travel every other year broadens our students’ experience of the world we all share. There is no substitute for working and learning side-by-side with those who speak different languages and live in a different culture.”

http://www.iberkshires.com/story/46340/Waldorf-High-School-Students-Make-Historic-Trip-to-Cuba.html
Posted by John McAuliff at 7:18 PM No comments:

Cuba Travel Services arranges weekly, non-stop public charter flights between the United States and Cuba and is licensed by the US Treasury Department´s Office of Foreign Assets Control (OFAC) as an authorized Carrier Service Provider specializing in travel to Cuba. The company offers full service travel arrangements to individuals, groups, families, educators, students, professionals and organizations, under specific or general licenses issued by the Office of Foreign Assets Control.

Holguin was Christopher Columbus entrance into the New World. The city has a history of more than five centuries and some of the most picturesque scenes in Cuba.

KEEPING UP WITH THE JONESES: PEOPLE-TO-PEOPLE TRAVEL TO CUBA

Posted by John McAuliff at 6:13 AM No comments:

U.S. is Cuba's No. 2 source market after Canada, study finds 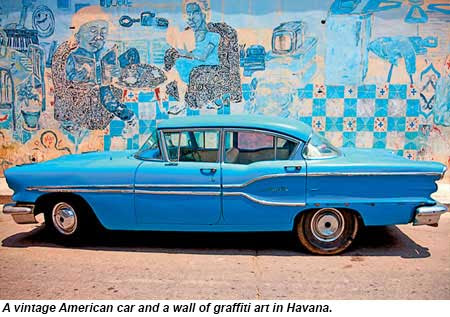 The number of U.S. visitors to Cuba continues to rise, placing the U.S. market as the second-largest source of visitors to Cuba after Canada, according to a recent study by the U.S.-based Havana Consulting Group.

By comparison, England, Germany and France each had fewer visitors to Cuba for all of 2013.

The U.S. Q1 2014 visitor total topped the quarterly record of 159,450 U.S. visitors, set in the last quarter of 2013, according to data issued by Cuba's National Office of Statistics and Information.

"The push in the first trimester has been huge," said Emilio Morales, president of the consulting group. "Data confirms, although the Cuban government does not recognize it publicly, that the United States, even with the effect of the embargo, is the second greatest source of tourists to Cuba after Canada.

"We anticipate that 2014 will be a record year in the number of flights and U.S. passengers to Cuba," he said.

Of last year's total, 470,732 were Cuban Americans visiting relatives, while 26,298 were returning Cubans and 102,396 were academics, lawyers, businessmen and travelers on cultural exchanges, such as the people-to-people programs.

On average, Cuban-American travelers spend approximately $3,200 per person during their stay, accounting for a major source of revenue for the economically strapped island.

The rapid growth in the U.S. market over the last seven years, even with the embargo still in place, reveals that the U.S. has the potential to become the top source market, according to Morales.

This scenario could change in the coming years "if the U.S. government enables some exceptions and allows tourism to Cuba under more flexible conditions," according to the study.

The continuing increase in U.S. travel to the Communist-run island comes five years after the Obama administration loosened restrictions on travel to Cuba.

In 2009, President Obama lifted a limit put in place by former President George W. Bush allowing Cuban-Americans to travel to Cuba no more than once every three years to visit relatives.

In 2011 the U.S. reinstated the people-to-people trips, enabling U.S. citizens to participate in educational activities that promote contact with Cubans in various walks of life.

Havana is the top destination for most U.S. travelers on group trips with licensed, authorized operators, followed by Santa Clara, Camaguey and Cienfuegos.

Insight Cuba, for one, had a record first quarter, and company president Tom Popper noted that November and December tours are booking ahead of schedule.

http://www.travelweekly.com/Caribbean-Travel/US-is-Cubas-No-2-source-market-after-Canada-study-finds/
Posted by John McAuliff at 7:48 AM No comments:

(Neb.)-CSC Offers Trip To Cuba With Class
By: Chris Fankhauser Posted at: 04/08/2014 06:57 AM
(Chadron)- Chadron State College will offer a course entitled Cuba Libré this coming fall semester. As part of the offering, the class will travel to Cuba from December 9th – 17th.
Cuba Libré promises a truly unique class and study abroad experience. It is almost impossible for U.S. citizens to travel to Cuba on their own; however, CSC has obtained a special educational license from the U.S. Department of the Treasury for travel to the island.
The trip is open to all students and can count for one to six credit hours of credit toward Essential Studies, General Studies, Elective, and select major and minor requirements.
The cost of the trip has been worked down to approximately $3,000.
People are invited to come to an Informational Meeting on Wednesday at 4 pm in Old Admin #227.
Other inquiries can be directed to Dr. Deane Tucker at ttucker@csc.edu or Dr. T. Smith attsmith@csc.edu.
-CSC Information Services

http://www.chadrad.com/newsstory.cfm?story=33193
Posted by John McAuliff at 8:19 AM No comments:

Posted by John McAuliff at 9:43 PM No comments:

International tourist arrivals to Cuba rose 7 percent annually in January and February to 636,146 travelers, accounting for 21 percent of the 3 million visitors the government expects to receive this year.
The number of foreign visitors in the year's first two months was up from the 593,344 tourists received in January and February 2013, National Statistics and Information Office, or ONEI, figures show.
The Tourism Ministry said Cuba is forecasting 3 million international visitors in 2014 after failing to reach that goal last year, when the Communist-ruled island received 2,851,000 tourists.
Canada remained the main source of international visitors to Cuba in January and February with a total of 155,622 tourists, followed by France, Germany and Italy, according to ONEI. Cuba is currently in its tourist high season, which runs from November to April.
The Caribbean island earned $1.8 billion last year from tourism, its second-leading source of foreign exchange after services exports.
Source: La Prensa (San Antonio)
Posted by John McAuliff at 10:04 PM No comments:

KANSAS CITY, KAN. ----- It might be months away, but the Kansas City Kansas Community College Jazz Band is ramping up fundraising efforts for its trip to the 2014 Havana International Jazz Festival later this year.

“This is a bonafide once-in-a-lifetime opportunity for our students,” said Jim Mair, professor of music and director of instrumental studies at KCKCC. “They will see the sights and hear sounds that can only be heard in Cuba. Authentic, non-pretentious and real.”

The KCKCC Jazz Band was invited to perform at the 2014 Havana International Jazz Festival in Havana, Cuba last fall. The festival is Dec. 17 to 22. The band was invited based on its long reputation as one of the premiere community college jazz ensembles in the nation.

The Havana International Jazz Festival started in 1978 when Bobby Carcasses and other Cuban jazz musicians had a concert at the Case de la Cultura de Plaza.

The following year, Chucho Valdes, now the president of the festival’s organizing committee, gave another concert. Those yearly concerts morphed into the festival as it is known today.

In addition to attending the festival, the jazz band will have the opportunity to take a guided tour of the UNESCO World Heritage Site and the Havana Historical Centre; tour Cuba’s National Museum of Fine Arts; visit the Institute Superior de Arte, the country’s top art academy; explore Finca Vigia, where Ernest Hemingway lived for more than 20 years; enjoy tap dancing and live jazz music at Pena de Santa Amalia and learn about the Cuban culture. Any U.S. citizen is allowed to travel to the small country with the appropriate license.

Donations are currently being accepted to help the KCKCC Jazz Band with the approximately $60,000 of travel expenses.

Checks can be made payable to KCKCC with “Cuba Trip” written in the memo area. These can be given directly to Mair or Patrick McCartney in the KCKCC Endowment Office for a tax write-off option. Other future fundraisers include selling merchandise at the Jazz Summit, church concerts, a big band dance and donations from the monthly Jazz by the Lake event.

The trip is also open to those within the Wyandotte and Kansas City area community.

Those who are interested in traveling with the jazz band are responsible for their own expenses and travel costs. Mair said he has received about 20 requests for information from interested community members.

For more information on the KCKCC Jazz Band’s invitation to the 2014 Havana International Jazz Festival and on the group’s fundraising efforts, contact Jim Mair at jmair@kckcc.edu or call 913-288-7149.

http://www.kckansan.com/2014/04/kckcc-jazz-band-raising-money-for-cuba.html
Posted by John McAuliff at 2:15 PM No comments: