Although he did not achieve all that he was pursuing with regard to Cuba, there is no doubt that Obama’s new policy opened a path of rapprochement with the island.

by Carlos Alzugaray
in Cuba-USA
0 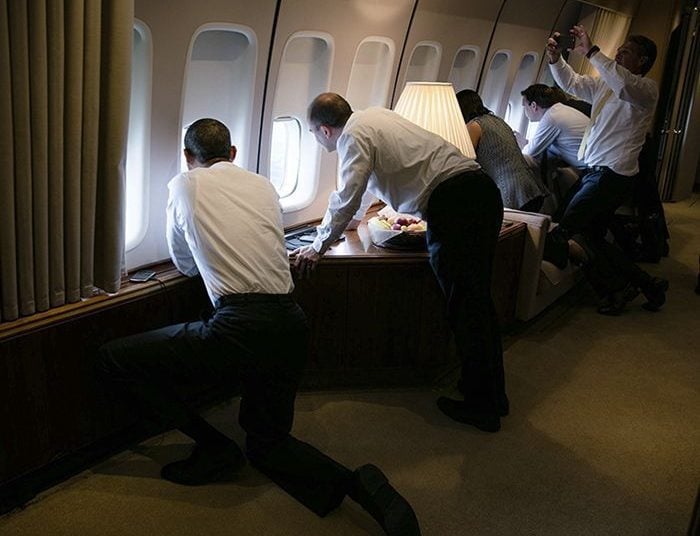 President Obama and members of his team look out the windows of Air Force One during the landing in Cuba. Photo: Pete Souza/The White House

“The peoples who don’t know their history are condemned to repeat their mistakes.”

Susan Rice, current director of the Domestic Policy Council in the Joe Biden administration, was the second and last National Security Advisor to Barack Obama between 2013 and 2017. Although she had no public participation in the negotiations or in the execution of what was agreed between Raúl Castro and Obama on December 17, 2014, she was involved in the decision-making process. In fact, in her memoirs she said that she was a supporter of the broadest possible engagement. Rice highlighted the importance of that agreement saying that the joy for this historic policy change and its flawless execution were the culmination of her term as national security adviser, adding that it also turned out to be a longed-for turning point and that after a year and a half of relentless challenges and very few clear triumphs, a success that was a marvel of the next to come had finally been achieved.1

In the first installment of his memoirs, “A Promised Land,” former President Obama acknowledged that advisers from two different generations coexisted in his administration. Some, like Hillary Clinton, were staunch supporters of Cold War belligerent positions; others, such as Dr. Rice herself (who was his Ambassador to the United Nations in the 2009-2013 period), or Ben Rhodes, the architect of the negotiations with the Cuban government, had gravitated towards his electoral campaign “precisely because I was willing to challenge the assumptions that we often called the ‘Washington Playbook’”; that is, a traditional way of looking at American national security. Among these forms he cited several examples: “the policy on the Middle East, our position on Cuba, our aversion to diplomatic dialogue with our opponents.”

This perspective helps to better understand two of the most controversial passages that the president used in his speech on March 22, 2016, five years ago, from the Alicia Alonso Grand Theater of Havana, broadcast live on Cuban national television . The first of these passages was:

“I know the history, but I refuse to be trapped by it.”

And towards the end he reiterated that concept with a whole paragraph in which he expressed the same idea:

“The history of the United States and Cuba encompass revolution and conflict; struggle and sacrifice; retribution and, now, reconciliation.  It is time, now, for us to leave the past behind.  It is time for us to look forward to the future together, a future of hope.”

What he meant—and he repeated—is that he refused to view the Cuban issue with the confrontational attitude typical of the Cold War. It was an appeal to all. The fact that he said it in Havana did not mean that it was a phrase only for the Cubans who live on the island.

The dissenting reaction of many Cubans regarding this phrase is largely explained because the prevailing perspective among Cubans who live on the island is that the conflict with the United States has not been motivated by the Cold War, but by a long history of U.S. hostility toward the existence of Cuba as an independent nation.

Hence, many considered that the president’s reference was an unwarranted appeal for not knowing the history. However, these assessments ignored the references that the president himself made to his personal career and to the fact that he was aware that the United States had caused harm to the Cuban nation.

The dissenting reaction to those phrases ignored what was likely the central message of the speech, something that no pre-1959 president had ever said:

“I’ve made it clear that the United States has neither the capacity, nor the intention to impose change on Cuba.  What changes come will depend upon the Cuban people.  We will not impose our political or economic system on you.  We recognize that every country, every people, must chart its own course and shape its own model.”

That position was reiterated in the Presidential Policy Directive — United States-Cuba Normalization that President Obama issued on October 16, 2016:

“We will not pursue regime change in Cuba. We will continue to make clear that the United States cannot impose a different model on Cuba because the future of Cuba is up to the Cuban people.”

On the other hand, since he began in national politics, Barack Obama has opposed the economic blockade and has insisted that it should be lifted unconditionally. He thus ratified it until the end of his mandate, in the last speech of the State of the Union, on January 13, 2016 before a joint session of Congress.

If President Obama’s attitude towards Cuba was bold when deciding to reestablish diplomatic relations and visit Havana, so was Raúl Castro’s, who agreed to start the normalization process without previously lifting the blockade.

It is probable that the then Cuban president was guided by that warning of José Martí in his essay “Honduras and the Foreigners,” published in Patria on December 15, 1894, in which he referred to “Our America” ​​but also to the America that is not ours, “whose enmity it is neither sane nor viable to foster, and of which with firm decorum and shrewd independence it is not impossible, and it is useful to be a friend.”

Although he did not achieve all that he was pursuing with regard to Cuba, there is no doubt that the new policy of President Obama opened a path of rapprochement with our country. In this sense, he issued a series of presidential orders that expanded the possibilities for economic contacts, although it must be recognized that they were insufficient when compared to the dense network of regulations that prevent them.

What followed the 2014-2017 opening is already known. Under the administration that succeeded him, most of what was agreed was reversed and 240 sanctions or unilateral coercive measures were adopted, even after the COVID-19 pandemic outbreak. There was also something that may have very negative repercussions: a substantial transformation in the state of opinion of citizens or residents of Cuban origin in South Florida, who went from supporting Obama’s policy to accepting and applauding the new aggressive sanctions and measures.

At the end of the first quarter of 2021, with Joe Biden in the high command of the White House, relations between the two countries are frozen and have not changed one iota from how the previous president delivered them, with several specifications It is worth remembering: unfairly, Cuba was once again included in the list of state sponsors of terrorism; under the pretext of the so-called “sonic” incidents, the staff of the embassies of both countries was reduced and the U.S. consular section in Havana was closed, which affects Cuban and Cuban-American families; Title III of the Helms-Burton Act was put into effect for the first time since its existence; and all the general licenses issued by President Obama as a method of making holes in the blockade were canceled.

The Biden administration has gone no further than stating that the measures taken by his predecessor are being reviewed, but that this is not a priority. Meanwhile, the debate on Cuba policy within the U.S. political system has intensified.

What lessons do these events leave us? I will suggest the following as hypotheses:

https://oncubanews.com/en/cuba-usa/learning-from-history-five-years-after-barack-obamas-visit-to-cuba/
Posted by John McAuliff at 7:58 PM No comments:

Editorial Board of Bloomberg.com on Biden and Cuba

Biden Should Return to Engagement With Cuba

It would benefit ordinary Cubans and put the onus on the regime to respond.

House Democrats are reportedly pressing President Joe Biden to reverse U.S. policy on Cuba once again, returning to the detente that prevailed before Donald Trump took office. Biden should indeed take the first steps toward renewed openness — and put the onus on Cuba’s Communist leaders to respond.

As with so many of his predecessor’s policies, Trump was quick to declare the Obama administration’s rapprochement with Cuba a “bad deal” and began dismantling it wholesale, imposing or re-imposing more than 200 restrictions on travel, trade, and financial and diplomatic ties. The clampdown won Trump votes in southern Florida, but by almost any other measure it failed. Cuba’s Communist regime remains firmly entrenched. If anything, it’s grown even more dependent on U.S. rivals Venezuela, Russia and China. Hardliners in Havana have continued to crack down on dissent. Cuban entrepreneurs flourished when Americans were allowed to visit the island, but the combined impact of revived U.S. restrictions and the pandemic have left them struggling.

None of this serves U.S. interests. Under Obama, the U.S. and Cuba struck more than 20 agreements that addressed U.S. security concerns, on issues ranging from counter-narcotics to the environment. Biden should open the door to renewing such cooperation.

That will require lifting Cuba’s designation as a state sponsor of terrorism, which the Trump administration imposed in its closing days with no real justification. Biden will also need to restore frayed diplomatic ties — appointing an ambassador, staffing up the U.S. embassy (taking additional security precautions while the cause of a mysterious illness that struck U.S. diplomats in recent years remains under investigation), and resuming consular services so Cubans can travel to the U.S. again. The two sides should cooperate on public health to combat the pandemic and restart talks on security issues.

Further opening should focus for now on improving the lives of Cubans on and off the island. The administration should lift restrictions on remittances. And it should allow travel to the island, because American visitors are good for local enterprise. That means permitting flights to cities other than Havana and people-to-people exchanges, while drawing up a shorter “restricted list” of entities with which Americans are forbidden to do business.

Cuba shouldn’t expect the U.S. to lift more targeted sanctions, however, let alone the decades-old embargo — whose provisions are now codified into U.S. law — unless it begins to move, too. Among other things, that means addressing certified claims for property seized after the 1959 revolution, now estimated at nearly $9 billion with interest. Cuba’s leaders should play a constructive role in resolving the Venezuelan crisis and improve their record on human rights at home. The government has recently taken some steps to rationalize the country’s currency system and promote the private sector, but should do more to open the economy to outside investment. The Communist Party transition next month, when 89-year-old Raul Castro is scheduled to step down, offers a moment for the regime to affirm its intention to reform.

Stubborn and suspicious as they may be, Cuba’s leaders should remember two things. First, all these measures are in their nation’s own best interests. Second, any thaw in relations will be temporary unless Biden can point to results. The Cuban regime made a big mistake in failing to build on Obama’s initiative, leading many in the U.S. to conclude that engagement was pointless. The next detente will fail unless it benefits Americans and Cubans alike.

Posted by John McAuliff at 3:51 PM No comments: