Jumping on the interest generated by President Obama's new policy on Cuba, the Wharton School of the University of Pennsylvania said Tuesday that it would conduct a conference April 1 in New York City for companies and executives interested in doing business in the Caribbean nation.

"This is going to be a really big change for the entire region, and a historic change for relations between the United States and Cuba," said Mukul Pandya, editor-in-chief of Knowledge@Wharton, who will host the Cuba Opportunity Summit.

Wharton hopes the summit will become a series of events, with a future gathering in Havana.

The United States and Cuba have been at odds since Fidel Castro led a revolution that took power in 1959. Though Obama can order that full diplomatic relations be restored, only Congress can remove the economic embargo that has prevented most travel and nearly all trade between the nations.

The conference will be cochaired by Faquiry Diaz Cala, chief executive officer of Tres Mares Group Inc., an investment firm based in Miami, and Mauro F. Guillén, management professor and director of Wharton's Lauder Institute.
"Unleashing Cuba's potential in the global economy is essential to fostering change from all perspectives, and it will hopefully lead to a more integrated Caribbean region," Guillen said in a statement.

Even if Congress lifts the trade embargo, Cuba still has a communist government that maintains tight controls on people and businesses.

Pandya said that companies involved in travel, tourism, and infrastructure development might be interested in starting work in Cuba, but that there are business risks for all types of organizations, such as uncertainty about property rights, laws, and regulations.

"We want to explore the economics of the change," he said. "The question is understanding the opportunity and the risks."

When news broke that Washington and Havana would be renewing diplomatic relations, the phones at InsightCuba began ringing off the hook with Americans interested in traveling to the island.
InsightCuba and other people-to-people providers, which are licensed to organize trips to Cuba that promote engagement between Americans and the Cuban people, anticipate more travel. But some providers say even bigger changes are ahead — perhaps allowing authorized travelers to visit on their own rather than only on an organized tour.
“It’s all a bit tentative because Treasury hasn’t come up with the new travel regulations yet,” said John McAuliff, executive director of the Fund for Reconciliation and Development, which has worked to end the U.S. embargo since 1985. “But it’s clear in the language of the president’s announcement that they’re talking about every American, not just organizations. ”
McAuliff, who has organized people-to-people tours — the most recent in November — said he expects the whole process of Cuba travel will be shaken up and that the changes could make Cuba travel more accessible to a wider demographic of Americans.

Students from the University of Virginia will travel to Cuba at a time when the United States is restarting its relationship with the isolated island nation.
Twenty-six Darden Business School students will arrive in Cuba next Monday to begin a week-long visit. The school planned the trip earlier this fall before President Obama announced the U.S. would resume diplomatic ties with Cuba.
The students will study the Socialist country's transitioning economy through business and healthcare.
“My hope is this will be the opportunity to see the beginning of something rather than something that's already been achieved,” said Gregory Fairchild, a Darden School associate professor of business administration. “My biggest hope would be some of them will think this might be a place where they would consider possibly now engaging economically. “
This is Darden's first student trip to Cuba. The school hopes to make it an annual experience as relations develop between the U.S. and Cuba. 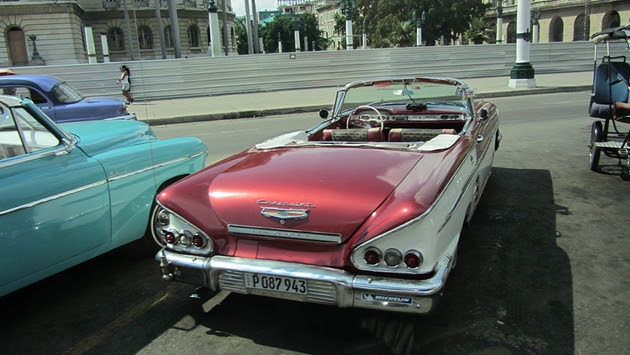 Tauck, the Norwalk, Conn.-based tour operator, unveiled a new longer and more intensive Cuba program that explores more of the country beyond Havana than its previous offering, which began operating in 2012.The consumer demand for Cuba continues to be voracious, and operators are competing fiercely for marketshare by enhancing and expanding already popular itineraries.
Tauck’s previous program, now discontinued, included six nights in Havana. The new expanded version includes three nights in Havana, two nights in Cayo Santa Maria, three nights in Camaguey, one night in Holguín and two nights in Santiago de Cuba.
Both the previous program and the current offering begin with one night at the Sofitel Miami in preparation for catching a charter flight to Havana the next morning.
The trip includes visits to the birthplace of Fidel and Raul Castro, the Che Guevara Mausoleum in Santa Clara, the tomb of early champion of Cuba independence Jose Marti and many encounters with contemporary artists and musicians, as well as local people in various walks of life, such as fishermen and restaurant owners and operators.
According to Katharine Bonner, Tauck vice president, the customer responses to the previous itinerary were “fantastic,” but the company chose to expand the itinerary because, “We wanted to provide a richer and more diverse itinerary, and while the guests on our initial itinerary gave their experience very high marks, we learned in the process that there was a desire among our guests to see more of the country and gain an even deeper understanding of Cuban history and culture.”
In the U.S. Tour Operators Association’s recently released Packaged Travel Index, Cuba entered the top 10 on its Emerging Destinations list, debuting at No. 2, right under Myanmar, which has held the top position for three years.
Tour operators unanimously report that the demand for Cuba is of stellar dimension. Tauck is no exception.
“Our guests absolutely love Cuba,” said Bonner, “and it was their interest and their passion that prompted us to enhance our itinerary there.  The response to the new tour has been fantastic, and several of our early 2015 departures are already sold-out.”
The new program is priced from $7,465 double occupancy, not including airfare.
http://www.travelpulse.com/news/tour-operators/tauck-introduces-expanded-cuba-program.html
Posted by John McAuliff at 8:01 AM No comments:

Credit: Getty Images
The U.S. government grants special travel licenses for what it calls People-to-People trips, on which American tourists mingle with Cubans. Most such trips revolve around art or education, but the Miami-based Ocean Foundation’s Cuba Marine Research and Conservation Program trips focus on science. One itinerary includes scuba diving and observing sea turtles on the Guanahacabibes Peninsula. This national park and UNESCO Biosphere Preserve on the western end of the island contains some of the Caribbean’s healthiest coral reefs and a three-mile long beach where 897 sea turtle nests were laid this summer.
The trips are led by sea turtle specialist Julia Azanza and coral biologist Patricia Gonzales, both of the University of Havana’s Center for Marine Research. Azanza joined our group on an afternoon tour of the nesting beach, where during nesting season, students spend two-week shifts in a rustic camp, monitoring and collecting data. At night, the group watches as tiny heads pop out of the white sand, followed by front flippers churning to pull the rest of the palm-sized bodies onto the beach. A handful of hatchlings will suddenly burst out at once, clambering over each other and up the side of the nest, illustrating why scientists say a hatching nest is "boiling."
The next day, it's time to follow the turtles into the water. A three minute ride on the dive boat takes us to El Almirante, a coral reef starting at 30 feet deep where the variety and number of fish surpass that of most any dive site in the Northern Hemisphere. Cuba’s reefs look much as they did more than 50 years ago thanks to remoteness, decades with little tourism development, largely chemical-free agricultural practices, and the nation’s small population. Cuba also made an intentional commitment to protecting its environment.
The trip includes four days at the nearby resort, Maria la Gorda, time enough to enjoy the twice-daily dive outings as well as the beach peep show, seeing the park’s limestone caves, hiking to spot endemic birds like the bee hummingbird and brightly colored Cuban Tody, and swimming in a seaside sinkhole.
More Info: The next Cuba Marine Research and Conservation Program’s People-to-People trip in November focuses on coastal ecosystems and includes participation in the Christmas Bird Count. Another sea turtle and diving trip is scheduled for June, 2015. [$3,420, seeturtles.com]
– Melissa Gaskill

For the first time in five decades US travelers are legally permitted to travel to Cuba. In early 2014, The Ocean Foundation received its license from the U.S. Department of Treasury Office of Foreign Assets Control to engage US residents in educational travel to Cuba. Our trips ensure a fully supervised, full time agenda of activities that allow US citizens to interact with Cuban marine scientists, policymakers, fishers and urban and rural residents. Our license allows travelers to legally experience Cuba's natural riches above and below the water, and our trips also provide a unique  platform to discuss environmental, social and economic issues shared by both countries.

The Cuba Marine Research and Conservation Program organizes itineraries of one to two weeks in duration. We work with a range of travel providers such as Avalon Cuban Diving Centers, Marazul Charters, and Holbrook Travel. Our trips are led by CMRC staff or paid contractors to The Ocean Foundation.

We invite you to explore wild areas in Cuba seen by few American tourists. Destinations include the reefs of the Isle of Youth, Guanahacabibes National Park and biosphere reserve, remote archipelagos off the main island of Cuba, the ecologically and historically famous Zapata Swamp, as well as the bustling city of Havana. For more information, email travel@cubamar.org or visit this page for future itineraries.

Learn about Cuba's coastal ecosystems and participate in a Christmas Bird Count across the island's coastline.

Dates: December 13-22, 2014On this 10-day journey, work with Cuban citizen scientists to help tally birds while learning about Cuba’s diverse coastal ecosystems and ongoing conservation efforts. As you engage with community members, gain a more in-depth understanding of this Caribbean island’s people and their daily way of life. This is only the second Christmas Bird Count organized in Cuba, following a citizen science effort and tradition over 100 years old!
Here is a detailed trip itinerary.

http://www.cubamar.org/
Posted by John McAuliff at 3:33 PM No comments: