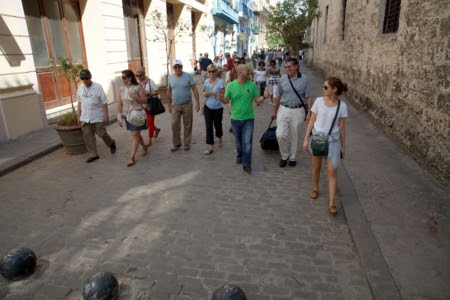 For the past 15 years, Eizenberg, through Educational Travel Alliances (ETA),the company he and co-worker Kathy Rice founded, has facilitated hundreds of visits to Cuba for U.S. citizens.

The groups have been varied -- some are 55-plus softball players looking to play ball against Cuba's finest retired baseball players; others are area Catholics looking to provide relief to needy Cubans.

"This is not a trip. It's an exchange," Eizenberg said of his work.

This past week, Eizenberg led a 17-person Boston-area delegation on one of those exchanges.

Combining tours of culturally significant sites with visits to Caritas Cubana relief programs, and culminating with attendance to the Papal Mass at Havana's Revolution Square, the group had the chance to get to know the Cuban people personally.

"To me, exchanges such as this are a great way to bring people to share memories, sing together, play dominoes, and get to know that we really are not that different from one another," he said.

"We may be politically different, but we are culturally entwined," he added.

Eizenberg is not new to the travel industry. He began working as a tour guide for high school students traveling to Europe four decades ago when he was a graduate student. That opened the door to a career of coordinating large groups of students on class trips to South America and Europe.

In 1997, he changed professions, becoming a professor at Bentley College in Waltham.

While teaching at Bentley College, he travelled to Cuba for the first time in 1998 to study small business creation.

"The first time I came, I was hooked," he recalled. "I felt something in myself that I hadn't felt in a long time -- and that was that I could make a difference. Not a big difference, but a little difference in individual people's lives."

He turned to Rice, his long-time coworker, and together they began ETA. He was granted a "people to people" license -- a permit from the U.S. government that allows travel to Cuba for educational or cultural purposes -- and by 1999 he was bringing groups to Cuba regularly.

Bringing Americans to the Caritas Cubana sites are a "great way to bring the United States to the people of Cuba," so that they can make "personal connections" with individual people, he said.
"Cuba is unlike any other place we have taken anyone," added Rice. "You feel like you are really touching people's lives -- be it the tour guides, the waiters, everyone -- which is unlike anywhere else in the world since now society is so homogenized everywhere."

"By nature, the American people are very generous," added Eizenberg, noting that people who go on his exchanges often come laden with everything from soaps and spices to nail polish and children's toys -- items that can be found on any U.S. store shelf but can be nearly impossible to obtain for ordinary Cuban citizens.

Eizenberg noted that he has seen how the Cuban people have been changed by the donations they have received.

"It makes me feel very happy to see that they are starting to feel human again," he said.

For Eizenberg, the trips are also closely linked to his personal experiences.

He said the words of his mother, a survivor of a Nazi death camp, echo in his mind whenever he brings a group to Cuba.

"She used to say, 'We knew we were really in trouble when no one was coming (to Germany) anymore and we were left alone with them,'" said Eizenberg.

"I don't want that to happen to the Cuban people anymore," he added.

In the future Eizenberg is hoping to develop a campus ministry program facilitate student mission trips to Cuba.

"Campus ministries go everywhere in the world to help people, but they don't go to Cuba," he explained.

"We shouldn't keep Cuba off the map," he said.
http://www.thebostonpilot.com/article.asp?ID=14526

Posted by John McAuliff at 1:30 PM