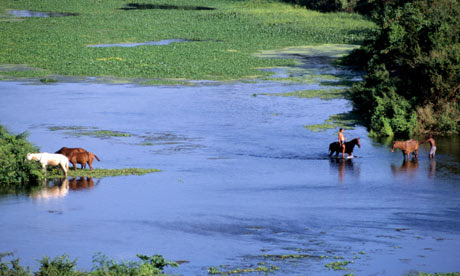 Explore the countryside near Trinidad, Cuba, on a private horseback tour. Photograph: Alamy
"Clown, magician, party quizmaster", reads the list of positions for which self-employed licences are available to enterprising Cubans. The opportunities for private sector jobs are myriad since the change in the law in 2010 allowed private enterprise to flourish. While options like these may well be lucrative career choices it is undoubtedly businesses that give Cubans access to the tourist dinero that are most sought.

Activities such as independent scuba diving tours and private dance groups are part of the burgeoning private sector. On a trip this year, travel journalist Claire Boobbyer found that Julio Muñoz's horseback tours (+53 41 993673) through the beautiful countryside near Trinidad were far better than the state options.In a country that is as body beautiful as Cubait's little surprise that there's been a surge in private spas. Conner Gorry, born in New York but living in Cuba and author of the Havana Good Time app says: "State massage venues and gyms have always been popular but now these very smart and well-run, private spas are now driving competition." With services that range from Swedish massage to yoga classes and indoor cycling she rates O2, (Calle 26B #5, +53 7883 1663) as one of Havana's finest.
Havana's famously lively nightlife scene is also changing. Locals –and in-the-know tourists – now head to the independently run Fashion Bar (Kessell #52, Vibora Park, +53 7 644 2894). This supper club bursts its glittery seams with the best of the capital's formidable drag queen talent and is popular enough to warrant a strict reservations policy – still something of a rarity in Cuba.
Low taxation is also fuelling the boom: in order to boost private sector revenue the government has either suspended or reduced taxes. This is set to change early next year when full taxation will gradually be rolled out. It's inevitable that some less profitable businesses will fall by the wayside but until then the spirit of free enterprise courses through this socialist stalwart.
• Fiona is co-author of The Rough Guide to Cuba