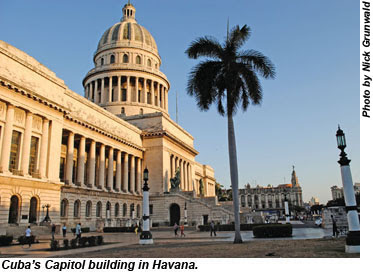 The people-to-people educational and cultural programs in Cuba, so highly touted since they resumed last year, seem to have hit brick walls on both sides of the Straits of Florida.

The larger problem is on the U.S. side, where dozens of license-renewal applications, which are required by the U.S. Treasury Department’s Office of Foreign Assets Control (OFAC) each year of organizations running these programs, are backlogged in OFAC offices, waiting to be reviewed by a small staff made even smaller because of recent cutbacks.

On the Cuba side, there is no longer a means in place to obtain the visitor cards required by the Cuban government.

OFAC, which is charged with overseeing, implementing, licensing and regulating all categories of travel to Cuba by U.S. citizens, “is working to turn around the license applications we have received as quickly as possible,” according to John Sullivan, OFAC spokesman for terrorism and financial intelligence.

“The people-to-people program remains robust,” Sullivan said.
What had been a fairly simple renewal process abruptly changed when OFAC issued new guidelines on May 10 that called for more specific and detailed information regarding activities on each itinerary, both for programs already sold as well as for those going forward.

OFAC claims that some organizations had violated stipulations that program activities have to be of a cultural or educational nature in which participants interact with Cuban people.

In other words, no lounging on the beach at the Varadero resorts or salsa dancing in Havana clubs allowed.

“We revised the license application criteria to stress to applicants the seriousness of the requirements of the people-to-people licensing program, in part because of reports we received concerning travel under the licenses,” said Jeff Braunger, OFAC program manager for Cuba travel licensing.

He said the revised criteria would help address what OFAC views as deficiencies regarding license applications.

“These changes will provide clarity to applicants and licensees seeking renewals, facilitate our reviews of license applications and help to deter abuses by licensees,” Braunger said. 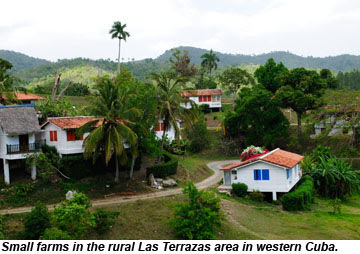 OFAC has issued approximately 140 people-to-people licenses since the program resumed in 2011. The list of the licensees is confidential, according to OFAC.
Companies and organizations offering the people-to-people programs already had been required to wade through a legal minefield of federal regulations to obtain their licenses.

Tour operators, including Insight Cuba, Friendly Planet and Austin-Lehman, had to partner with or be associated with nonprofit organizations, some of which already held a license to offer other categories of travel to Cuba, such as educational, religious or cultural tours.

Tour operators cannot obtain such a license themselves, under OFAC regulations.

Once companies or organizations obtained a license to operate people-to-people programs, they had to turn to U.S.-licensed Travel Service Providers (TSP) to handle the travel arrangements, including booking hotels, air, tours and activities in Cuba.

One requirement of the new guidelines stipulated that renewal applications could not be submitted until 60 days before the expiration of the current license.

Given the delay in OFAC’s processing of renewals, many companies are now in a “gap period,” according to one operator. “We don’t know if we will receive the license renewal in time to run the programs already on the books or if we have to tell our clients that the departures are delayed.”

That puts a lot of programs with September departures and beyond in limbo, since the programs cannot operate without a valid license.

That also puts in question the hotel inventory in Cuba booked by the operators as well as local Cuban suppliers, such as guides and bus drivers.

It also means staff layoffs for employees, who are specifically trained to handle the details of the people-to-people programs.

The Obama administration reversed the policy and restrictions begun under President George W. Bush in 2004 and posted new travel regulations on Jan. 28, 2011, allowing the resumption of people-to-people educational programs for the first time since 2003. 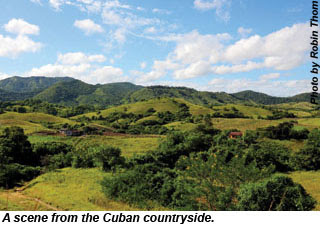 The move was highly touted because it opened a travel portal, albeit with U.S. government rules and conditions.

The newest measure did not lift the economic embargo, which has been in place since 1960; tourist travel to Cuba remains illegal.

Under the people-to-people regulations, travelers still had to go in groups and be accompanied by authorized, U.S.-government licensed operators.

What was different was that the policy change broadened the definition of group travel to Cuba from strictly religious, academic and cultural travel to include U.S. travelers who wanted to mix, mingle, meet and share experiences with Cubans under the people-to-people category of travel.

‘Lifetime memories’
“Often it is the people you meet while traveling who create lifetime memories,” Tom Popper, director of Insight Cuba, said last year. “A sharing of experiences is what these programs are all about. We can maximize opportunities for our travelers to do just that.”

Popper was the first to jump back into the fray, having run these programs from 2000 to 2003.

“Response exceeded expectations,” Popper said. “We added more departures and programs this year based on our 2011 year-end bookings.”

Marazul Charters, a Miami-based travel agency licensed by OFAC both as a Carrier Service Provider (CSP) to sell charter flights to authorized groups traveling to Cuba and as a TSP to handle the travel arrangements, carried 5,000 travelers in the first six months of the programs, according to Bob Guild, vice president.

“From our standpoint, the people-to-people programs have been overwhelmingly successful,” Guild said. “The current slowdown in the license application and renewal procedures and the tightening up of criteria has frozen the programs right now.”

Change to tourist cards
Beyond the problems being encountered in this country, there is also a holdup on the other end, in the form of tourist cards, which are required by the government of Cuba for every U.S. traveler entering or leaving Cuba.

In the past, Marazul and other TSPs could fill out travelers’ cards, provided the traveler had been vetted as an authorized people-to-people participant or was traveling under a legitimate license with a religious, educational or cultural group.

The cards, which ranged from $10 to $50 each, were then stapled to a traveler’s airline ticket and presented upon arrival at the airport in Havana.

The cards now have to be obtained from the Cuban Interests Section, housed in the Swiss embassy in Washington.

“The U.S. has determined that Cuba has to be the issuing agent for these cards, so the cards and data have to be filled out by the Cubans before the passengers can be issued their tickets, which will further delay the entire process,” Guild said.

There is no procedure in place at the Havana airport for travelers to pick up and fill out an entry card upon arrival.

This is a very important article but it contains several errors and omissions and ignores the fire-storm of anger OFAC has created and the Treasury Department's spokesman is trying to dampen by falsely characterizing people to people as remaining "robust".

1)  The OFAC delay is entirely political.  As the Miami Herald reported, the new guidelines issued in May were part of a deal with Sen. Rubio to get him to lift a hold on confirmation of the Assistant Secretary of State for Western Hemisphere Affairs.  The "änd/or" constructions in OFAC guidelines seemed to make it a symbolic victory but implementation suggests otherwise. http://cubapeopletopeople.blogspot.com/2012/09/how-sen-rubio-derailed-people-to-people.html

2)  "OFAC claims that some organizations had violated stipulations that program activities have to be of a cultural or educational nature in which participants interact with Cuban people" is the spin that has consistently come from Cuban Americans who oppose all travel.  Because OFAC permits only highly programmed group travel, all American trips are organized by one of three Cuban state companies so their itineraries are fundamentally similar.

3)  There is no requirement for a P2P licensee to be a not for profit.  Insight Cuba, Friendly Planet and Austin-Lehman have their own P2P license and only Insight is a not-for profit.  In fact OFAC shut down two commercial tour operators early on because they were using someone else's license and has specifically required all publicity be in the name of the license holder.

4)  As a further unnecessary obstacle, unlicensed third parties are not allowed by OFAC to collect payments for a group they are sending in cooperation with a licensed P2P.

5)  OFAC's non-transparency is reflected in the absurd confidentiality of the names of P2P licensees, in contrast with its on-line up-dated listing of Travel Service Providers.  It is an improvement that OFAC is finally saying publicly how many licenses were issued but it refuses to reveal how many applications were denied.  An estimate based on registration numbers is at least ten times as many denials as approvals.  Visibility of the list would make it easier to find ways to go to Cuba legally and make more obvious OFAC's bureaucratic delay, arbitrariness, inconsistency and probable politicization .

6)  As noted by AW194, the problem with tourist cards is completely created by new guidelines for Service Providers OFAC issued in July.  Anyone who travels through a third country, with or without an OFAC license, obtains a tourist card at airport check-in at a substantially lower cost.

7)  It is possible the White House or State Department are directing OFAC to throttle travel for electoral reasons, misreading completely opinion in Florida, or have the illusion of being able to pressure Cuba to release USAID funded covert operative Alan Gross,

8) It is noteworthy that the head of OFAC, Adam Szubin, was appointed by Bush and has been responsible for aggressive and petty anti-Cuba actions embarrassing to the US, including preventing Cubans from staying in hotels owned and managed by US companies in third countries.  Perhaps he is predisposed to listen to Sen. Rubio and Rep. Ros-Lehtinen and is running the clock on renewals in hope that Mitt Romney will be elected.

9)  During the Clinton Administration, similar licenses were issued for two years.  Was it the White House, the State Department or OFAC that created the current mess by cutting the time in half?

10)  If the White House wants to save the President's significant initiative to open travel, it has two choices:
a) Treasury Secretary Geithner can direct OFAC to serve as a service for registration not for subjective evaluation of a license applicant's purpose and practice.
b)  The White House can direct that all purposeful travel receive a general license requiring no application to OFAC just as it did for Cuban Americans, universities and religious organizations.  That will enable individuals and families to similarly self-attest about their non-tourist motives and create their own independent unsupervised programs in Cuba, using public transportation, renting cars, staying in privately owned bed and breakfasts and eating in privately owned restaurants.  In many ways that offers the most authentic people to people experience.

11)  A complementary step which the White House can easily do is to enable all US travel agents and tour operators to sell air tickets, hotel and program bookings for legal travelers, just as travel agents already can in third countries.  Currently about 250 licensed Travel Service Providers have a semi-monopoly so OFAC can control the process.  Two-thirds are located in Florida and virtually all are Cuban American owned companies.


Three on line petitions are generating pressure on this issue:

Insight Cuba has addressed its own situation, and the impact on its staff

FRD is raising the standard of a general license for all purposeful travel and opening up to all travel agents and tour operators.
http://signon.org/sign/remove-bureaucratic-obstacle?source=c.em.cp&r_by=945311