Guantanamera: The US Connection


Guántanamera, Courtesy of the U.S.-Cuban Embargo

Like millions of Americans, I learned the iconic Cuban song (and unofficial Cuban national anthem) Guántanamera from Pete Seeger in the 1960s, with its inspiring lyrics by the revolutionary poet José Martí. Last weekend, at a reunion of Camp Woodland—a progressive summer camp that operated during the 1940s and 50s in upstate New York—I discovered that we have the U.S. embargo of Cuba to thank for that.
It turns out that Pete, who sang the song with us again at the reunion, learnedGuántanamera from a Woodland counselor named Héctor Angulo during Seeger’s annual visit to camp in 1962. Héctor, a budding musician from Santa Clara, Cuba, had won a scholarship from the new revolutionary government in 1959 to study at the Manhattan School of Music. With the break in U.S.–Cuban relations and the beginnings of the embargo, Héctor’s financial situation had deteriorated, but he feared that going home would prevent his return to complete his studies. Hence, the summer job at Woodland. 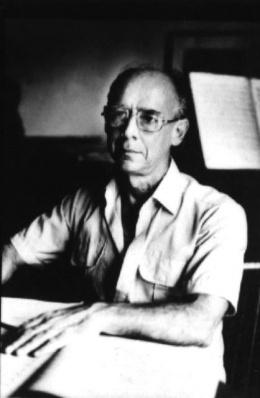 Cuban composer Héctor Angulo. Credit: EcuRed
My friend Dick Cluster—a translator of Cuban literature and essays, co-author of theHistory of Havana, and author of the forthcoming translation of Aida Bahr’sOphelias—did some more research on the subject. It seems that the original music and verses (about a woman from Guantánamo) are generally attributed to José Fernández Diez, who popularized the song in his 1930’s radio show called La Guántanamera. The updated version using Martí’s poem as lyrics is credited to Spanish composer Julián Orbón (1925-1991), who lived in Havana between 1940–1960 and was Héctor’s teacher at the Manhattan School of Music.
Martí composed the Versos Sencillos (Simple Verses), which provide the lyrics toGuántanamera, in the Catskill mountains in 1891, not far from Camp Woodland. He was sent there by his doctor to recuperate, after organizing tirelessly for Cuban independence and against U.S. expansionism in Cuba (the U.S. at the time was considering purchasing Cuba from Spain).
Martí also had an important connection to Guantánamo, which is near the point where he and several comrades disembarked in 1895 in their failed attempt to spark a revolutionary uprising. He was later killed in the Battle of Dos Rios.
Today Héctor Angulo is a well-known composer of chamber, choral, and orchestral music in Cuba. You can hear an audiotape of the event where Héctor teaches Guántanamera to Pete, recorded 50 years ago on July 15, 1962, in the Camp Woodland archives (starting around minute 35).