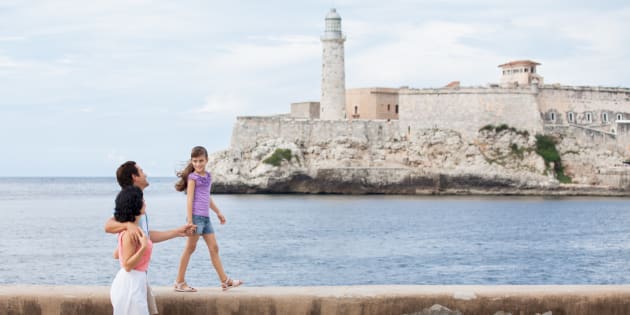 ALDOMURILLO VIA GETTY IMAGES
There's more to Cuba than rum and cigars.
It's a fair bet that if your summer barbecue discussion came around to travel bucket lists, you found yourself talking about Cuba at some point.
Cuba was one of the crucibles of European settlement in the Western Hemisphere. The capital, Havana, served as the launching pad for much of Spain's conquests in the Americas. It celebrates its 500th anniversary in 2019. This means there are buildings throughout Cuba which are old and grand. They give the effect of gorgeous Old World European cities set in the tropical New World. The country is stunning.

These are the ingredients for the adult trip of a lifetime -- but how does it all work when you take kids?

Laughter, party and dance are central to the national culture (dancing is taught before reading, a senior Cuban official told me with a twinkle in his eye). Cubans relishing life is evident everywhere.
Add this to the rum, cigars and bars filling every nook and cranny -- along with a live Cuban band in most of them -- and this might just be the coolest place on the planet. These are the ingredients for the adult trip of a lifetime -- but how does it all work when you take kids?

It was a worry I hadn't quite managed to shake as I planned our family holiday to Cuba with children aged six, nine and 12 in tow. A skeptical US Customs Official didn't help when we transited through LA. "I get Cuba for you, but for the kids Disneyland is right here!"
Even as we landed in Havana, an older Australian couple on an organised tour brimming with excitement about their holiday couldn't help themselves: "Why would you bring the kids here?"

By the time we'd navigated the airport and were heading into Havana, my anxiety on this question was inducing a sweat.
I shouldn't have worried. The kids had a blast, and we had a blast with them.
When the first convertible American Chevy complete with fins drove past with pink and white duco direct from 1957, the kids were sold. "Oh, Dad we have got to have a ride in one of those." After nine days of Cadillacs, Dodges and Buicks -- all of them 'Americano clasico' -- Harvey couldn't understand why we didn't have cars like these in Australia.

An explanation of why Cuba has old cars led to the blockade, the Cuban Revolution, Fidel and Che and a surprising amount of interest in what it was all about. Countless images of Fidel and Che adorning shops, billboards and buildings fuelled the curiosity. While there is a limit to how much a six-year-old will absorb about Marxist-Leninist dialectical materialism, the absence of any McDonalds stores or Coke signs or, in fact, any advertising, lets them know something is up.
Life in Cuba has everything from the modern, five-star hotels of Varadero, to farmers driving horse and carts on the main road to Havana. Between those extremes is an entire spectrum which has the technology dependent child of today out of their comfort zone.
This unusual society, with most living a modest life by our standards, presents a lifestyle markedly different to home. Children see this easily. They ask questions. They appreciate home in Australia. They feel lucky and, of course, they are. This moment alone is worth the trip.

Irrespective of their standard of living, the Cuban people have vitality. Staying in a Casa -- a sort of Cuban version of a B&B -- provides the opportunity to meet the locals. Every single person we met was warm, friendly and helpful. English was spoken enough for us to get by, but learning some Spanish phrases was a really nice theme to our trip.
Everywhere you go Cuban music is being played. Everywhere.
It's a truism that Cubans live their lives in the streets, and you feel the joy that goes with that as you walk around. And that joy will certainly animate the faces of your children.

You can stand on the walls by Havana lighthouse, listen to the ocean crash against them, look out to the Atlantic and almost see the pirate ships terrorising these parts centuries ago.

The old architecture which was stunning to my wife and me also spiked the interest of our kids. The colourful terraces in Trinidad set on cobbled streets with Spanish tiled roofs were unlike anything our children had seen in Australia. Bell towers provided an opportunity to climb up very narrow wooden staircases, which left me breathless but had the kids pursuing an adventure. The view which rewarded this effort was always worth it.
But the buildings which really demanded attention were the two forts on the eastern side of Havana harbour. These are a child's paradise. Genuine, spectacular forts resembling castles with a plethora of canons overlooking Havana afford the most stunning views. You can stand on the walls by Havana lighthouse, listen to the ocean crash against them, look out to the Atlantic and almost see the pirate ships terrorising these parts centuries ago.

Cuba is pretty easy travelling. It's changing fast, so some of the cautionary tales in the guide books are out of date.
You can find ATMs, for example. The warnings that credit cards with US links, such as MasterCard, might be useless weren't quite right. My MasterCard issued by an Australian bank worked in a number of ATMs (even if the restaurants and shops all wanted cash).
The food was fine and often great value for money. You can't drink the water out of the tap but there is bottled water everywhere.
Getting around was easily done by taxi. In town, most rides were under AU$10. And even the four and a half hour trip from Havana to Trinidad cost AU$200 which was competitive with a bus fare for five people. However, it pays to choose wisely the car in which you travel, as the trips can be a little hairy in the 'Americano clasico'. Of course, the better the car the more expensive the ride.

Most of all Cuba is totally safe. Every guidebook makes this point. And not for a moment did we have the slightest concern about ourselves, our children or our property.

Obtaining WiFi is possible, but it was difficult enough for us that we chose to cut off from it and the mobile phone for nine days. It is hard to put into words how truly wonderful and liberating that was.
Most of all Cuba is totally safe. Every guidebook makes this point. And not for a moment did we have the slightest concern about ourselves, our children or our property.
Cuba is beautiful, and it feels like a timeless beauty, but the sense of it being a little removed from the world is changing. Some western brands are creeping into shops. The first American tourists are already there and in time they will come in force.
This will be great for Cuba (as it will be for the American tourists) but the feel of Cuba will be different even if the change is only small.
So now is a great time to go. There is enough change to make travel easy while not being so much as to alter Cuba's character. It will prove itself worthy of your bucket list as you sip a mojito listening and watching live Cuban salsa in a cool Havana alley. And while being with the kids probably means this experience will be had at 5pm rather than 1am, you will all have one of the world's most wondrous family holidays.

http://www.huffingtonpost.com.au/richard-marles/what-you-took-the-kids-to-cuba/
Posted by John McAuliff at 7:34 AM