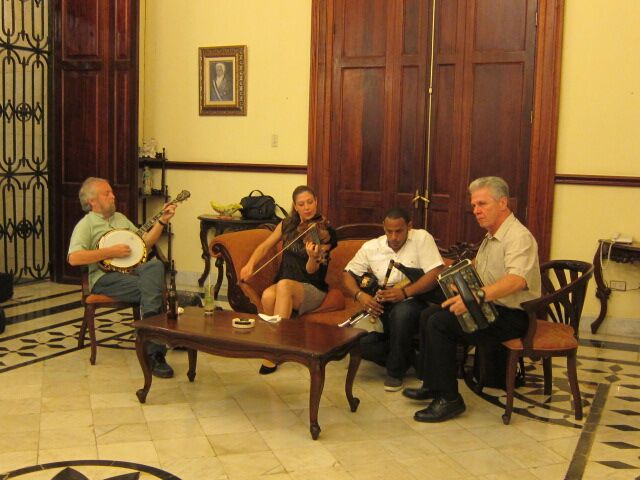 To great local press acclaim and overflow audiences, Mick, Athena, Billy and Niall performed in Havana in November 2014, the first visit by a group of professional Irish traditional musicians from the US. (Five minute finale http://tinyurl.com/IrishFinale; full concert http://tinyurl.com/MoloneyCuba)

They are making a return trip with friends and supporters for concerts, workshops and an Irish embassy hosted reception November 20-24, 2015.  Details here http://tinyurl.com/MoloneyCubatrip

Our licensed people to people program explores the Irish and Irish American heritage of Cuba.  We see sites linked to the O’Farrill family, O’Reilly and Dynamite Johnny O’Brien; learn the history of Felix Varela, exiled priest and advocate of New York’s Irish famine immigrants and of the father of Prime Minister Eamon de Valera; and visit a memorial to the Irish hunger strikers http://tinyurl.com/AdamsCuba (draft schedule below)

If you wish to accompany them and witness first-hand the impact of the historic normalization of diplomatic relations between the US and Cuba, contact John McAuliff, director@ffrd.org

The estimated cost is around $950 for non-stop air from New York ($550 from Florida) plus $1200  for the four days while Mick and the other musicians are in Havana.  That includes hotels, most meals, local transportation, and guide/interpreter.  Unless we can find sufficient outside support, we will also ask each participant for a tax deductible contribution to help cover musicians expenses and performance arrangements in Cuba.  The amount suggested is $500 per person, but it could be less or more, depending on personal circumstances.  (The total is still less than most people to people commercial tours of Cuba.)