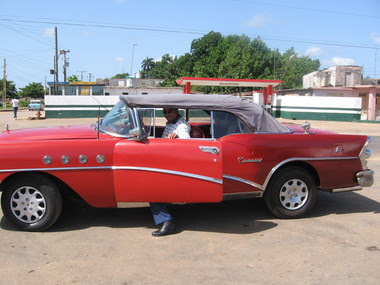 This 1956 Buick Roadmaster is one of the classics seen rolling down the roads of Cuba.Courtesy photo
The following is a letter to the editor that was sent to the Kalamazoo Gazette.

BY TERRY TESSARI
Sleep was difficult in the sultry night air. One solitary fan offered little relief. The street light from outside of my sleeping room in Perico, Cuba shone through the louvered windows and rested on the far wall in that distinctive pattern of separated light and shadows. How interesting, I thought. But as interesting as the visual was, I was here to try and see the Cuban people in a different light, undistorted by stereotypes of zealous ideologues full of hostility toward their neighbors to the north.
What I knew about Cuba before making this trip in June with six members of Westminster Presbyterian Church in Portage could be put in a thimble: Castro assuming power after the revolution, the Bay of Pigs fiasco, the Cuban missile crisis. In the five decades since those events transpired, the world has undergone great transformations technologically, politically and culturally, but in Cuba, change has been slow.

This bio-digester used to create methane for home use is an example of community cooperation in Cuba.Courtesy photo
Stepping out of the airport after our flight from Miami confirmed that impression. It was like stumbling onto the set of “American Graffiti” without Suzanne Somers in a white T-Bird – but with all the other popular cars of the 50’s crowded the streetscape. The Cubans were driving ’55 and ’57 Chevy Bel Airs, ’58 Ford Fairlanes, ’56 Buick Roadmasters. Most of them looked great and were running well, albeit with Russian engines due to the U.S. trade embargo that has cut off supplies and parts to Cuba. In spite of these difficulties, Cubans take great pride in maintaining these classics turning the whole country into a rolling car museum with a head turner around almost every corner.
On the roads, the cars compete with bicycles, horse-drawn carts, walkers and hitchhikers, all trying to get around as best they can due to the unreliability of public transportation. This challenge of mobility for the Cuban people displayed both their ingenuity to keep their cars running and also their community spirit to give rides to their fellow citizens trying to get to their destinations.
I saw this same ingenuity and neighborliness from some families in Perico, who joined together to build a bio-digester to capture methane gas from a mixture of water and hog excrement in order to light their homes and provide fuel for their stoves. As the Cuban government slowly moves toward a more market-driven economy and private initiative, the Cuban people, I think, will take full advantage of the opportunities to improve their lives for many of the people we met were industrious, resilient, hard-working and ingenious.
On the last night in Havana, sitting on the far terrace of the Hotel National with a full moon coming up over the harbor and the pedestrian walkway that skirts its edges, I could truly say that I was beginning to see Cuba in a different light.
Terry Tessari resides in Portage. He retired minister in the United Church of Christ. He and six members of Westminster Presbyterian Church in Portage visited Perico, Cuba, about 3 hours from Havana, June 17-24.

This trip was presumably made under a religious general license.  Any religious organization can make a trip with an authorization letter from a responsible official.

Posted by John McAuliff at 9:33 AM