When it Comes to Cuba: It’s an Upside Down World 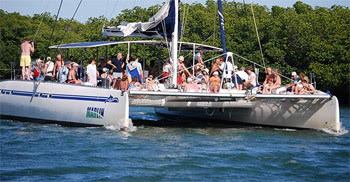 A group of tourists on an excursion in Varadero, Cuba. Photo: Raquel Pérez
HAVANA TIMES — Miami has been in an uproar ever since the US Treasury Department´s Office of Foreign Assets Control (OFAC) resumed granting licenses to American citizens who want to visit Cuba in compliance with the policies of the “People to People Contacts Program”.
According to protests by some spokespeople of the exile community, those trips blend tourism with indoctrination. Nevertheless they don’t explain what the consequences of such ideological penetration by Cuban communists would be for the national security of the USA.
Among the most serious proof they mention were the presence of a group of US citizens who took part in a concert for Fidel’s birthday and a meeting between Americans and Raul Castro’s daughter, Mariela, a known a defender of the rights of the LGBT community in Cuba.
It’s curious that they fear the indoctrination of their tourists and at the same time assure people that Cuba is sunk in the most miserable quagmire and that most Cubans are discontent. Those who come from a country with opportunities and freedom shouldn’t have anything to fear.
What’s happens is that the problems of the island are exaggerated so much that when one comes into contact with reality, people discover they’ve been deceived. Cuba isn’t the paradise on earth that its national press paints for us, but nor is it the nightmarish hell those in Miami describe it to be either.
If the media and political activists in exile really believed what they tell us about the island, they themselves would promote trips from the US to Cuba so people could see with their own eyes what is happening there and then spread this information across the entire United States.
Also, there are barely 10,000 Americans who travel to the island every year with special licenses approved by their government. Although they lose themselves among the 2.5 million other tourists who visit Cuba yearly, I occasionally run into some of these people walking through Old Havana.
Picking them out isn’t difficult; they’re the only travelers who move through the city in groups and with their credentials hanging from their necks, like we journalists do when we work. I sometimes wonder what they do with those things when they go swimming at the beach.
But those restrictions aren’t imposed on them by the “Cuban indoctrinators.” According to John McAuliff, from the Fund for Reconciliation and Development, OFAC is the one that insists on full-time structured programs instead of trusting the Americans to go, explore and see things for themselves. The US Interests Section office in Havana. Photo: Raquel Pérez
In the end, with so many regulations from Washington, these Americans who visit Cuba greatly resemble the stereotyped image of Japanese tourists wandering the streets in groups, weighed down with cameras and snapping photos in all directions.
In Miami they criticize American tourists to Cuba because they drink mojitos and dance salsa, but I really haven’t been able to come up with a better way to come into contact with the Cuban people, relating to folks in the streets, in bars, discos and even in tourist hotels – where 400,000 Cubans who live in Cuba spend their vacations each year.
The People to People Contact Program was approved by the US Congress in the 1990s to foment “significant interactions” with Cubans; in other words, it was aimed at politically influencing the citizens of the island by promoting the “American lifestyle.”
That was the plan, but I don’t imagine that these tourists — with their clueless looks, flowered shirts, Panama hats and sandals, and who walk along with sunburnt skin languishing under the heat — are engaged in very much political proselytizing, through their translators, trying to get Cubans to reverse the revolution.
It seems that George W. Bush realized the limits of that strategy and put an end to licenses for US citizens. He even cut the mojitos and salsa enjoyed by the Cubans from Miami, reducing their trips to the island from once every year down to once every three years. He had to demonstrate that they were politically persecuted.
The US Republican presidential candidate Mitt Romney — advised by Senator Marco Rubio and Congress members Mario Diaz Balart, David Rivera and Ileana Ros — promises that if he’s elected president, he will prohibit trips to the island and suspend the sending of family remittances.
But since he has yet to be elected, hundreds of thousands of Cuban-Americans continue traveling to the island every year, with them now having become the second largest group of visitors, behind the one million Canadian vacationers who go their annually.
Many of the Cuban-Americans even have their airfare paid in exchange for bringing merchandise to sell in Cuba.
The Cuban American congress members are pressuring Washington to maintain the embargo while those who emigrated send more than one billion dollars in remittances to Cuba annually. Similarly, these legislators lobby against trips by US citizens to the island while exiles visit the island in mass. It’s truly an upside down world!
—–
(*) An authorized HT translation of the original published by BBC Mundo.
http://www.havanatimes.org/?p=81311

Posted by John McAuliff at 8:41 AM