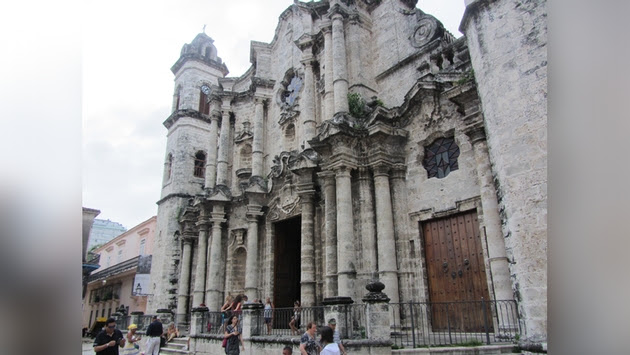 PHOTO: The cathedral in Old Havana. (Photo by David Cogswell)
Travcoa received its approval from the U.S. Treasury Department to continue operating People to People trips for two more years. The company is re-introducing its tour offerings with some modifications based on its first year’s experience.
Last year the company offered one trip. This year it has split the trip into two variations, one seven-day itinerary and one 10-day itinerary. Both are entitledCommunity, Culture and Cuisine.
“It was great to have a year of learning,” said Cathy Holler, vice president business development and product innovation. “One of the things that we learned about the traveler that wants to visit Cuba is that some want just a taste of it. They want a short trip. They don’t want to move around a lot. They just want to base in one place. Those are the ones who want to stay in Havana, use that as a base, almost as a hub and spoke to their experience.”
For travelers with that preference, the seven-day trip is appropriate. But Travcoa discovered that some travelers have distinctly different preferences and a second variation was introduced to meet the needs of more adventurous clients.
“There’s another side of the community of travelers that wants to have a more intensive exploration,” said Holler. “They want to actually get into the country and stay in places outside of Havana. Last year we had a full program that did Havana and into the external countryside, into Cienfuegos, Trinidad, Santa Maria and those regions.
“This year what we’ve done is we have a 10-day program that does spend three days visiting Santa Clara, Cayo Santa María, Caibarién, Remedios, Caletón, and Ciénaga de Zapata National Park. And then that program arrives in Havana and does the program in Havana for five nights. The shorter program just does the Havana part.”
Both programs begin with a pre-night in Miami.
Tour operators are allowed to take American citizens to Cuba even though the U.S. still has Cuba under an economic embargo since the early 1960s under the People to People provisions enacted under President Clinton, cut back by President Bush and then liberalized again under President Obama.
The People to People exception to the embargo restrictions is based on Americans visiting for cultural and educational exchanges with the Cuban people. Americans looking for a tropical beach vacation cannot do it in Cuba.
“One of the requirements of the People to People program is that it’s not a leisure vacation,” said Holler. “It’s a full-time program of educational exchange. So from the morning till 5 o’clock you are busy doing approved People to People exchanges where you’re engaging with the locals. So if someone is looking to travel to Cuba to go to the beaches, you can’t do that as an American visitor under the People to People licensing and opportunity. It doesn’t mean that after 5 o’clock or so when you’re at the hotel, if there’s a beach you can go to it. But during the daytime it’s not a beach vacation. This is really designed for somebody who is truly fascinated to learn about the culture, the people and the history, and to really get authentic engagements at a local level with Cuba.”
Like all U.S. tours to Cuba, Travcoa’s tours are highly regulated by the U.S. Department of the Treasury’s Office of Foreign Assets Control. Every day must include a minimum number of educational experiences that comply with the Office of Foreign Assets Controls People to People requirements. But the requirements only require the tour to be highly educational, which is what Travcoa’s trips have always been, so it’s a natural for Travcoa.
When each day’s requirements are met, participants are free to enjoy some leisure time. All meals are included on the program. Travcoa's Dine Around program allows clients to eat at a restaurant of their choosing and bring the receipt to the tour director for reimbursement.
For information, visit www.travcoa.com.
http://www.travelpulse.com/news/tour-operators/travcoa-returning-to-cuba-with-two-new-tours.html