Creating a Climate for Greater Conflict

The April 1 press conference at the White House was disturbing.

https://www.c-span.org/video/?470864-1/white-house-coronavirus-task-force-briefing
The first part of it focused on a military mobilization to stop cartels from using the Covid-19 crisis as an opportunity to send massive amounts of drugs to the US.

I wondered whether President Trump is attempting to use Covid-19 as cover for a Noriega style invasion of Venezuela.  Or whether the Administration believes that a war would take attention from the frightful domestic death toll from the virus.

The announced military mobilization is an odd response to purported cartel escalation (as though they aren't equally preoccupied and weakened by illness).

Part of the build up is the questionable well publicized indictment on drug charges of President Maduro et al and the phony political compromise Pompeo announced a couple of days ago.  It was advertised as an inducement for the military to finally turn against Maduro, but the proposed interim government would be a completely one-sided creation by Guaido and the opposition.

It appears Pompeo and Abrams (and Claver-Carone?) are making the same mistake they have from the beginning, thinking that the Venezuelan military will accept a US sponsored regime.

If they pursue this course militarily, we will tragically discover that Venezuela is not Panama.

When I circulated a version of the above,  two friends who know Washington and the security apparatus better than I responded to my analysis in this way:

1)  "I think you’re right, except the idea of a boots-on-the-ground invasion.  With COVID, no one’s going to enter that country.  But some kind of stand-off military action is not beyond the pale for these people.  The Trump people have tried, and failed, to effect three coups so far.  Maybe number four will be the charm.  With SouthCom sending ships down there, interference in oil shipments may be in the cards.
The indictment was, as you say, a complete fake."

2)  "Just a repackaging of old one-sided ideas that are almost certain to fail as they have so far.  I see virtually no chance these days of a US military invasion.  I think it would backfire badly.  However, these people are capable of almost anything, and they are clearly grasping for a way to turn a failed policy into something positive."

Posted by John McAuliff at 6:27 PM No comments: 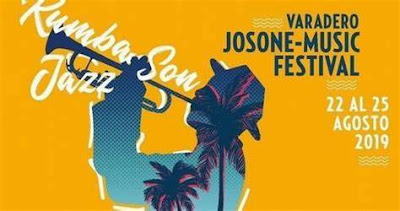 For the third year a four day festival will be held in Varadero in late August with some of Cuba's best jazz and son groups.  (Click here for the 2019 program.)  Below is information prepared for travel agents.

If we receive enough interest from agents or independent travelers, FRD will organize meetings with performers and festival organizers.  Prior to the festival we will visit the slavery museum in Matanzas, the history museum in Cardenas, the memorial to Cuba's largest slave rebellion and the museum at the sugar plantation home of the O'Farrill family.  In Cardenas we will also learn about the social, educational, agricultural and economic programs of the Christian Center for Reflection and Dialogue.

Americans who go to Cuba under the Support for the Cuban People license normally must stay in private bed and breakfasts, not in the State hotels listed below.  Even if we are not able to organize a program, festival attendees will have ample opportunity for spontaneous engagement with Cuban fans.

The full festival pass is 21 CUC. 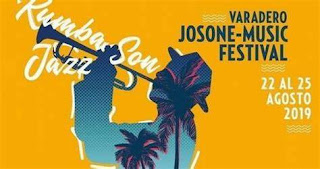 Posted by John McAuliff at 10:35 PM No comments: