A Visit to for Universities and
Others Interested in a Changing


Organized by the Fund for Reconciliation and Development.
Led by executive director John McAuliff

(Sequence and events subject to change)

Our people to people license covers anyone with a serious desire to participate, including spouses, trustees and third party providers.

3)  Wednesday June 12
8.00 AM Depart to Trinidad, a
10.30 AM Meet with historian’s office and family of pottery makers
12.30 PM Lunch*at Plaza Mayor
Exploration of
4.00 PM Check in at Hotel Las Cuevas
Dinner at Hotel
Preview musical performances and other potential student activities, including a disco in a cave (Las Cuevas)

6) Saturday June 15
9.30 AM Che Guevara memorial
10.30 AM Drive to
1.00 PM Lunch at and meet with for Reflection and Dialogue
Continue to Varadero
4.00 PM Check in Hotel Meliá Varadero All Inclusive

7)  Sunday June 16
Reflection on program to date
project
Lunch at the Hotel
2.00 PM Fortress and slavery museum
Return to Varadero

We strongly recommend registration and payment of tax deductible donation to FfRD of $300 as soon as possible to confirm air tickets.  Absolute deadline for registration and donation is noon June 3.  Balance of payment will be in cash on arrival in .

On request, an effort will be made to arrange alternative appointments at specialized universities in the area (list below) on Wednesday June 19. Personal payment of taxi fares may be required.

Universities in Havana area under Ministry of Higher Education

Other Universities and Educational Organizations in Havana area

Email
advertisement
BY JODIE WAGNER - PALM BEACH POST STAFF WRITER
Northern Palm Beach County Chamber of Commerce members and local residents will be among the few Americans to travel to Cuba this summer as part of the Chamber’s Discover Cuba program.
The seven-night trip, which departs Aug. 2, provides travelers the opportunity to gain a new perspective on Cuba’s history, culture and cuisine through cultural interactions and exchanges.
“We’re excited to be able to offer this trip,” said Hannah Sosa, the chamber’s director of communications and special events. “A family or a group of friends on their own wouldn’t be able to go.”
The Northern Palm Beach County Chamber of Commerce, a Jupiter-based nonprofit organization with more than 800 members, secured the proper visas in order take a group of travelers to Cuba, Sosa said.
U.S. citizens are permitted to travel legally to Cuba, with some limitations.
Participants will tour a variety of historical landmarks including the Museum of the Revolution and Ernest Hemingway’s farm, Finca La Vigia.
They also will visit the San Jose Craft Market and Art Center, attend a song and dance revue at the Tropicana Club in Havana and visit the countryside of the Vinales Valley, where they will tour a cigar factory, tobacco farm and family farmhouse. Also on the itinerary is a tour of the Bocoy Rum Factory and a visit to the National Museum of Fine Arts.
“This is an art and cultural trip,” Sosa said. “We wanted the chamber and the community to be able to go together.”
A second tour departs Oct. 6. Additional dates will be available in 2014.
Tour cost is $3,599 per person for Chamber members and $3,799 per person for non-members, based on double occupancy.
The cost includes round-trip airfare from Miami, seven nights of first-class hotel accommodations, 16 meals, professional tour escort, baggage handling, Cuban travel visa, Cuban medical insurance, sightseeing and admission to attractions.
The Discover Cuba program is operated by Premier World Discovery and Chamber Explorations.
The Chamber will host an informational presentation on the program at 5:30 p.m. Tuesday at Palm Beach State College’s Palm Beach Gardens campus, Room AD207, 3160 PGA Blvd.
For information, contact Jane Pike at 561-746-7111 or jane@npbchamber.com, or visit www.npbchamber.com/discovercuba.
http://www.mypalmbeachpost.com/news/news/local/north-palm-beach-county-chamber-to-offer-summer-tr/nXxPy/?icmp=pbp_internallink_textlink_apr2013_pbpstubtomypbp_launch

Posted by John McAuliff at 12:28 PM No comments:

By Gay Nagle Myers
Three more companies have survived a long and challenging trek through the government's bureaucratic maze to launch federally licensed people-to-people educational travel to Cuba this summer.

The companies are Central Holidays, the Globus Family of Brands and Michigan-based Other Cuban Journeys.

For Central Holidays, a mainstay tour operator to Europe since 1972, the foray into a destination on this side of the Atlantic "is a very big deal," said CEO Gianni Miradoli.

"We were getting requests from our clients who have traveled on our Europe group tours," Miradoli said. "They wanted to go to Cuba with us. We gave it a lot of thought and decided to take the plunge."

The operator partnered with California-based Premier World Discovery/Chamber Explorations, which was granted a license in early April by the U.S. Treasury Department's Office of Foreign Assets Control (OFAC) to operate the people-to-people cultural exchange programs.

This arrangement was created as a way for the federal government to limit travel to Cuba to low-key educational exchanges while the half-century-old Cuban trade embargo remains in effect. Agents who send clients to the operator are paid a referral fee as opposed to a commission.

"Within four days, we had sold out one of our October departures," Miradoli said. "Adding Cuba to our destination offerings allows us to further cater to our repeat customers who want to explore the world in the signature Central Holidays way." 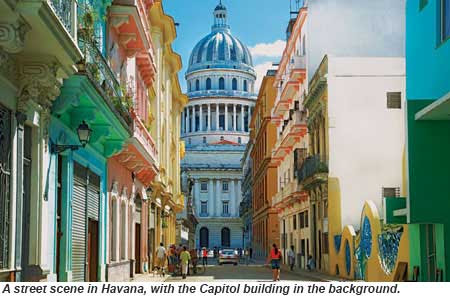 With all people-to-people programs, the tour operator handles the initial inquiries from agents and customers, and the licensee handles all payments, booking arrangements and financial transactions.

Agents receive a referral fee from the operator for directing clients to the program.

Central Holidays currently offers an eight-day Discover Cuba itinerary with a full schedule of activities in and around Havana. Tour participants meet with locals, artists and dancers during the trip.

"We will offer more itineraries in 2014," Miradoli said. "But for now, we want to ensure that the quality of the program measures up to the Central Holidays tour standards that our customers have come to expect."

For Globus, entry into the Cuban people-to-people market actually started two years ago. The company was poised to make its debut in Cuba with a series of escorted religious programs in January 2012 after unveiling its plans the previous August.

However, confusion and complications surrounding federal regulations and rules regarding licensed travel to Cuba caused Globus to pull back.
It's back on track now, with two nine-day itineraries offering 20 departures from July 14 through Nov. 3, followed by 13 more in 2014.

Group Voyagers, the company that markets and sells the Globus Family of Brands (Globus, Cosmos, Monograms and Avalon Waterways) in the U.S., received its license from OFAC in February.

"Our new programs are not religious in theme but instead offer a full schedule of people-to-people educational exchange activities designed to result in meaningful interactions between our travelers and individuals in Cuba," said Pam Hoffee, vice president of product and operations for the Globus Family of Brands.

The Undiscovered Cuba tour spends a week in Havana and includes tours of historical and cultural sights as well as interactions with artists, musicians, architects, cigar rollers, students and workers at a silk-screening studio.

Participants attend a workshop at Casa de Africa discussing the African culture in Cuba, mingle with members of the Santo Angel neighborhood, meet dancers, teachers and costume makers at the Camaguey Ballet Co. and talk baseball with Cuban players.

While Hoffee acknowledged that the Globus itineraries "may be similar to others in the marketplace, ours have been scrutinized to meet our Globus brand standards. We're using some of the best hotels in Cuba, selected some of the top national guides, dedicated one of our product managers who has visited Cuba many times to handpick the people-to-people interactions in our programs."

Globus also includes a welcome briefing in Miami with a group leader who accompanies all departures. 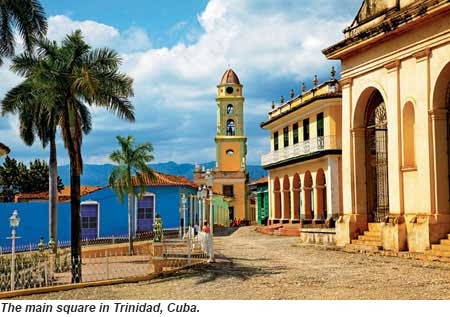 "We helped with the renaissance of that community and brought much-needed aid, as well," Whitesman said. "Through the years, we made many connections and impacted lives in Cuba as well as the travelers we brought with us, who told us that Cuba was a life-changing experience for them."

Saul, a Cuban-American, said, "Our past experiences, personal relationships and friendships with Cubans from all walks of life set us apart from other companies offering the people-to-people programs."

Other Cuban Journeys is offering six departures from June 17 to Jan. 20 on its eight-day Faces of Cuba itinerary, which includes Havana and the provinces of Matanzas and Pinar del Rio.

Prices start at $3,900 per person, double, including roundtrip air from Miami.

Group size on each departure will be capped at 24, Whitesman said.

http://www.travelweekly.com/Travel-News/Tour-Operators/Three-more-companies-get-U-S--approval-to-offer-Cuba-travel/
Posted by John McAuliff at 12:25 PM No comments:

A New Provider Enters the Market 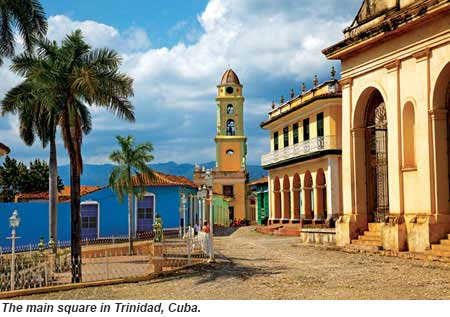 Globus has launched people-to-people educational tours of Cuba. Two nine-day itineraries are offered with 20 departures running from July 14 through Nov. 3, followed by 13 more in 2014.

Globus was poised to make its debut in Cuba in January 2012 after unveiling plans the previous August. However, confusion and complications surrounding regulations and rules regarding licensed travel to Cuba had caused Globus to pull back.

Group Voyagers, the company that markets and sells the Globus family of brands (Globus, Cosmos, Monograms and Avalon Waterways) in the U.S., received its license from the Treasury Department's Office of Foreign Assets Control in February.

"The new programs ... offer a full schedule of people-to-people educational exchange activities designed for meaningful interactions between our travelers and individuals in Cuba," said Pam Hoffee, vice president of product and operations for the Globus family of brands.

The Undiscovered Cuba tour spends a week in Havana and includes tours of historical and cultural sights along with interactions with artists, musicians, architects, cigar rollers, students and workers at a silk-screening studio.

Participants will attend a workshop at Casa de Africa discussing the African culture in Cuba, meet with members of the Santo Angel neighborhood; meet with dancers, teachers and costume makers at the Camaguey Ballet Co.; and talk baseball with Cuban players.

http://www.travelweekly.com/Travel-News/Tour-Operators/Globus-unveils-Cuba-tours/
Posted by John McAuliff at 8:44 AM No comments: