In the wake of the J-11 protests last month, U.S.-based experts should focus on changing U.S. policy towards Cuba. 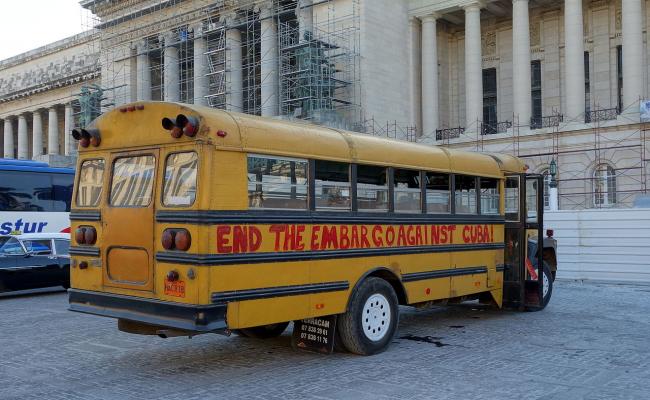 A school bus painted with a message protesting the U.S. embargo of Cuba. (Velvet, Wikimedia Commons)

Since the mass protests erupted on July 11 in Cuba (J-11), many “middle ground” U.S.-based Cuba experts have written or spoken about the situation in social media, online journals, and news outlets. While diverse in their viewpoints, they generally acknowledge that U.S. policy is at least partially responsible for Cuba’s current economic and political crisis which has been severely aggravated by Covid-19. Yet these experts have chosen to minimize the role of the United States and to instead center the Cuban people’s struggle against an authoritarian regime. This reaction is understandable, particularly for those, like myself, with family, friends or colleagues in Cuba. Unfortunately, however, this approach ignores the fact that the United States is a global hegemonic superpower. Narrowly focusing on Cuba and downplaying the role of the United States reinforces the U.S. government and corporate media’s inaccurate claim that the Cuban government is unique in its “misbehavior” and therefore deserves to be punished. Thus, this middle ground approach unintentionally legitimizes a policy that, by posing an existential threat to the Cuban government, exacerbates the Cuban peoples’ suffering and further constrains their agency to determine their own fate.

The Ethical Stance Behind Focusing on U.S. Policy Toward Cuba

For Noam Chomsky, critiquing U.S. foreign policy rather than the far weaker governments that it targets is an ethical stance that he sums up by saying, “you are responsible for the predictable consequences of your actions.” The U.S. government and corporate media apply this stance in the case of perceived enemies or rivals, including Cuba, Venezuela, Iran, Syria, Russia, and China. With the United States and its allies, that approach is applied inconsistently, if at all. Protesters in an enemy or rival country, like those in Cuba in recent months, are invariably praised as courageous because they risk their lives and livelihoods against what the U.S. sees as a repressive government.

President Biden’s statement in response to the J-11 protests in Cuba did not mention the embargo at all, absolving the United States of any responsibility or involvement and blaming the Cuban government.

“We stand with the Cuban people and their clarion call for freedom and relief from the tragic grip of the pandemic and from the decades of repression and economic suffering to which they have been subjected by Cuba’s authoritarian regime,” he said. According to Chomsky, these victims are seen as “worthy” in the U.S. government and corporate media’s eyes.

Nearly 140 years later in a classified 1961 memo, Arthur Schlesinger Jr., an advisor during the Kennedy administration, described the true nature of the threat that the Cuban apple posed by defying the laws of gravitation six decades after the United States plucked it. He wrote that “the spread of the Castro idea of taking matters into one’s own hand” was a problem because “as living standards begin to decline, many people tend toward Communism both as an outlet for social resentment and as a swift and sure technique for social modernization.”

If the U.S. government were genuinely concerned with opposing authoritarianism regardless of ideology, then it would have subjected numerous right-wing dictatorships, including that of Castro’s predecessor Batista, to a punishing embargo. Instead, in addition to the embargo, the United States subjected communist Cuba to a CIA-directed sabotage campaign that unleashed, according to Schlesinger, the “terrors of the earth.” The attack on Cuba was more intense than in any other country targeted for regime change in Latin America until Nicaragua in the 1980s. The result of that campaign was nearly 3,500 deaths. This number is higher than the toll of victims in the September 11 terrorist attacks, yet Cuba has been blacklisted by the United States for years as sponsoring terrorists.

Recentering the History of U.S.-Cuban Relations

As misguided as Biden’s about-face may be, it’s important to recall that Obama did not pursue normalization because he thought that the United States had unjustly singled Cuba out. Rather, in his 2016 Havana speech calling on Congress to lift the decades-long embargo, Obama admitted that the embargo was not working.

“We have to have the courage to acknowledge that truth,” he said, adding that “a policy of isolation designed for the Cold War made little sense in the 21st century. The embargo was only hurting the Cuban people instead of helping them.”

Obama failed to mention in his speech that the international community has isolated the United States, not Cuba, for its harsh policy toward the Caribbean island. Since 1992, the UN General Assembly has regularly voted to condemn the U.S. embargo by lopsided margins: in 2021, 184 countries voted to condemn it, two voted in support, and three abstained. In Washington, the U.S. policy debate over Cuba ignores this global reality and remains focused on a domestic tactical strategy. Thus it is unsurprising that the Cuban government has long been perceived as irremediably bad and deserving of severe sanctions by both the elite and, to a lesser extent, the general public across U.S. party lines.

Certainly, diverse U.S. constituencies perceive Cuba differently depending on their politics. The Black Lives Matter’s statement on J-11 in particular was strangely myopic, ignoring systemic racism in Cuba and the fact that J-11 protesters were disproportionately Black. But, as one white Miami-based Catholic commentator highly critical of the BLM statement analogized, “The Catholic Church hierarchy is not the Catholic faith movement.” Still, many middle-ground Cuba experts appeared to be more critical of the BLM leadership’s blunder than of the Republican, often racist, white Cuban American community in Miami, which propagates the opposite—and equally distorted—image of Cuba as a uniquely repressive regime. While some experts have usefully compared and contrasted how and why such U.S. groups project their polarized political imaginaries onto Cuba, they failed to point out the stark disparity between the actual influence that these groups exert on U.S. policymakers. For example, few Congressional Democrats supported the BLM leadership’s statement, while the right wing, Republican, Cuban American position remains operative U.S. policy under a Democratic president.

As a U.S.-based scholar of Cuba, I, too, am critical of how some progressive U.S. groups inaccurately characterized Cuba’s internal situation in the wake of J-11. But I differ from U.S.-based middle ground Cuba experts in that I strongly believe it is our ethical responsibility to focus on the most effective action that the U.S. government—the global hegemonic superpower—can take to alleviate the Cuban peoples’ suffering. That starts by definitively ending the illegal, immoral, and highly destructive 60-year-old U.S. embargo.

Editors’ Note: This piece forms part of NACLA’s continuing coverage and analysis of recent protests in Cuba, their evolving aftermath, and the wide-ranging responses they have elicited from left circles in the Americas and beyond. To read other pieces in the series, click on the additional titles below.