Visit Cuba to discover its Irish,
Celtic and Irish-American heritage


·       Irish wild geese and their descendants played military and economic roles in Spain’s colonial expansion in the 17th and 18th centuries, symbolized today by O’Reilly Street and the O’Farrill Hotel in Old Havana.

·       Cubans say that Father Felix Varela “taught us to think” before Spain exiled him to New York in 1823 for his advocacy of independence and abolition.  He became the advocate of the immigrant Irish, Vicar General of the Diocese in 1837 and is currently being considered for sainthood.

·       Irish Americans in the mid-19th century built Cuban railroads, served as engineers in its sugar mills, created schools, organized the first labor action repressed by Spanish colonial authorities and were executed for support of slave rebellions and independence.

·       Charles Blakely from Charleston was Cuba’s first mulatto dentist (Black mother, Irish-American father).  He was arrested in 1844 by Capitán General Leopoldo O´Donnell as the Havana leader of the Escalera slave rebellion.

·       A young Cuban artist fleeing the Spanish draft met his Irish immigrant wife in New York in the 1870s.  After his death, their young son Eamon de Valera was sent to Ireland, becoming a leader of the Easter rising and President. 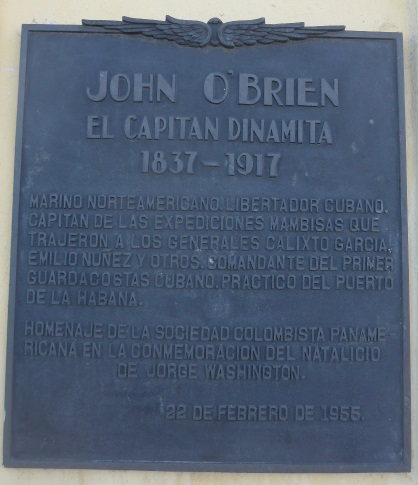 New York’s “Dynamite Johnny” O’Brien ran guns to Cuban nationalists in the 1890s.  He was honored in both countries, becoming Chief Havana Harbor Pilot and captaining the battleship Maine to its resinking in 1912.  (A plaque honoring Dynamite Johnny can be found on the Avenida de Puerto, 15 feet from the entrance to the Plaza de Armas, walking toward the cruise terminal and Plaza San Francisco.)
·        Sons of Irish women from New Orleans and Philadelphia, Julio A. Mella McPartland and Antonio Guiteras Holmes, were nationalist leaders killed for their resistance to the dictator Machado in the 1930s.

·       A memorial for the 1981 Hunger Strikers was dedicated in Havana by Sinn Fein President Gerry Adams to mark the 20th anniversary.  He revisited the site in 2015, praising the leadership shown by Cuban and US leaders in moving towards an end to decades of hostility between the two countries.

·       New York University’s Mick Moloney and the Green Fields of America performed in Havana in 2014 and 2015 with the support  of the US and Irish embassies, joined by local Celtic musicians whose ancestors immigrated from Asturia and Galecia.  In November 2017 they performed together in Holguin and Santiago.


More on the Irish connection can be read here   http://tinyurl.com/IrishCubanHistory

Join us in Cuba for a licensed historical and cultural people to people program
or do it on your own.
For information, contact John McAuliff, director@ffrd.org  917-859-9025
Posted by John McAuliff at 7:39 PM