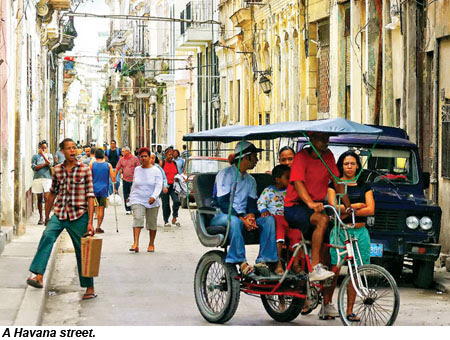 While many in the U.S. travel industry were pleasantly surprised by the Cuban government's recent change in policy, lifting the widely reviled exit permits required for Cubans traveling abroad, the move also prompted some concerns about the possibility of a mass exodus of people long deprived of the right to freely travel abroad.

Whatever the results of the new policy, however, Cuba experts said last week that the changes would not have much impact on the current people-to-people programs offered by companies licensed to operate extremely limited travel from the U.S. to Cuba.

Nor does it change the visas required of Cubans by the U.S. State Department.

"Our own visa requirements remain unchanged," said State Department spokeswoman Victoria Nuland. "We welcome any reforms that will allow Cubans to depart from and return to their country freely, and we remain committed to the migration accords under which our two countries support and promote safe, legal and orderly migration."

As of Jan. 14, Cubans will no longer need exit permits, which cost $150 in a country where the average monthly wage is $20.

Nor will Cubans need letters of invitation from their foreign hosts, which the Cuban government charges $200 to process.

They will, however, still have to obtain visas from most countries they plan to visit, and they still need a passport to leave Cuba, a time-consuming process that costs about $110.

Cubans wishing to visit the U.S. must procure a visa from the understaffed U.S. Interests Section in Havana, where even before the rules changed, by some estimates, applications just for interviews to begin the process were already backlogged 14 to 18 months.

In announcing the changes on Oct. 15 in Granma, the Communist Party newspaper, the government made it clear that it will continue to decide who can leave the island, as it has since Jan. 9, 1959, when the exit permit requirement took effect. The announcement also noted that "any Cuban could be kept from traveling when the proper authorities so decide."

In other words, the Cuban government still retains final say on who gets passports to leave.

Certain categories of Cubans, such as sports figures, those working in key technical and scientific areas, physicians and other medical personnel, military and government officials and others whose work is deemed vital to the state or to combat brain drain have to undergo special scrutiny and get special passports, according to the decree.

"The changes are part of work to update the current migratory policy, adjusting it to prevailing conditions in the present and foreseeable future," Granma said.

The measure also extends to 24 months, from the current 11 months, the amount of time Cubans can remain out of the country without losing rights and property.

They can also seek an extension beyond the 24 months, according to Granma.

Also abolished is the re-entry permit, which has been required since 1961 for Cubans who live abroad and wish to visit the island, but again this comes with caveats.

Anyone deemed "hostile" to the state for any number of reasons is not welcome.

So while the new policy really is not as broad as it seems and the devil is in the details, it does indicate a softening.

At the same time, the changes raise a lot of questions in the U.S., especially with regard to the "wet-foot, dry-foot" policies and the Cuban Adjustment Act.

As it stands now, Cubans who make it to land (dry foot) are allowed to stay. If they are intercepted at sea, they are sent back to Cuba.

John McAuliff, executive director of the Fund for Reconciliation and Development, a nonprofit organization that seeks to normalize relations between the U.S. and Cuba, sees political and legal challenges arising from Cuba's announcement.

"The Obama administration should respond immediately by using its power to allow all nontourist travel to Cuba without applying for a license, and it must press Congress to abolish all travel restrictions."

That move, he said, "would give all Americans who want to seriously engage with Cuba the opportunity to choose between organized tours or self-directed, unsupervised backpacking and family trips, using public transport, rental cars and privately owned bed-and-breakfasts and restaurants," he said.

McAuliff also advocated the suspension of the Cuban Adjustment Act and the wet-foot, dry-foot policy.

"With Cubans free to travel to Mexico and Canada [no visas required], 'step across the border' economic migration will become a bigger problem," he said.

He added: "I don't see any downside to it, but now we have to liberalize the U.S. regulations. It's a hot-button issue, and I don't see anything happening on that front before the U.S. election."

Although "we may not see much movement in travel from Cuba to the U.S. initially, these changes give Cubans much more flexibility in travel abroad," he said.

Adam Vaught, associate director of GeoEx, which also operates licensed people-to-people programs to Cuba, said he saw no impact on his departures "outside of adding a little chaos at Jose Marti Airport in Havana."

"As has been the case with all the policy changes and liberalizations that have taken place in the last six years, this is going to be a 'wait and see' situation," he said. "The Cuban government's concern is that there will be a brain drain and the most talented and educated in the country will leave for greener pastures."

Vaught said the difference between life in Cuba and life in the U.S. "is one of the most heavily discussed topics on the people-to-people trips we lead."

He pointed out that many of the musicians, artists and dancers that GeoEx participants meet in Cuba have sponsors in the U.S. or Europe that want to bring them to perform or present their work.

"They have been held back due to the restrictions," Vaught said. "They are frustrated at not being able to leave Cuba but none seem interested in staying away for good. Most just want the same ability to come and go that almost everyone else in the world enjoys."

http://www.travelweekly.com/Travel-News/Tour-Operators/Cuba-new-visa-policy-greeted-warmly-but-warily-by-industry/
Posted by John McAuliff at 6:17 AM