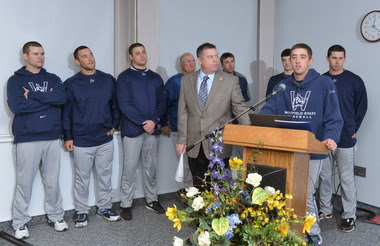 Athletics Director Richard Lenfest Jr., center, and members of the WSU baseball team, which last month played games in Havana, Cuba.Michael S. Gordon | The Republican
By MIKE GILLMEISTER
WESTFIELD – For once, the scores did not matter.

The Westfield State University baseball team traveled to Cuba from March 8-11 to take on some of the country’s finest players. The Owls lost both games to the Manuel Fajardo University of Sports and Physical Education, 5-3 and 7-0, but team members said the experience could not be measured by any numbers.

“It’s just amazing seeing the different cultures,” said WSU coach Ray Arra, whose team was competing against players ages 18 to 38. “The national treasure (in Cuba) is baseball. Someone said there are three things to do in Cuba: play baseball, box or run track. It was just a tremendous experience.”

Arra marveled at the skill of the players, who play on per-month stipends in the subsidized country. Some of WSU’s competition was absent, however, because they were returning from competing in the World Baseball Classic.

The opposition trotted out a righty in the day’s first game, who the Owls tagged for three runs, but the lefty starter in Game 2 silenced WSU entirely.

The Owls came into the series expecting to play collegiate-level teams, but the realization that they were playing major league-caliber athletes didn’t seem to phase them that much.

The exhibition matchups were the first showings of live pitching for WSU this season. If anything, the WSU players were more shocked they were playing a two-game series in the biggest stadium in all of Cuba, a 45,000-seat structure in Havana.

“We went down there expecting to play their collegiate-level teams and we ended up playing one of their pro teams,” said freshman catcher and Westfield native Evan Moorhouse. “The atmosphere, in the middle of our stretching, we were kind of just in amazement. Their passion for the game is beyond what you’re used to around here. They’re taking every at-bat as a 3-2 count in the bottom of the ninth with the winning run on base.”

“They combined all the fundamentals of the game together,” Sheridan said. “Their fielding was really polished. They knew what they were doing. They didn’t really have a lot of weak spots, that’s for sure.”

The Owls baseball team is the first Division III team to take the trip since President Barack Obama lifted the ban on student travel to Cuba in November 2011. WSU President Evan Dobelle has worked with Westfield State Athletics Director Richard Lenfest to expand the worldview of WSU student-athletes.

“For us to have this opportunity has been amazing and the student-athletes on our baseball team had a wonderful time and really appreciated the opportunity,” Lenfest said. “This will go a long way as something they’ll remember for the rest of their lives.”

http://www.masslive.com/sports/index.ssf/2013/04/westfield_state_university_bas.html
Posted by John McAuliff at 8:33 AM